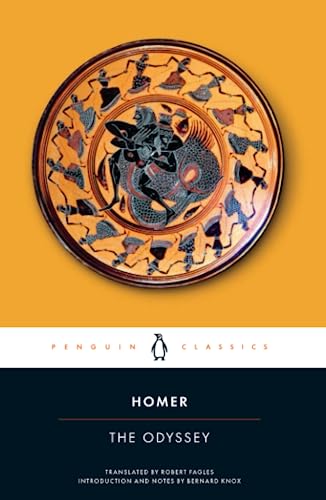 The Odyssey is literature's grandest evocation of everyman's journey through life. In the myths and legends that are retold here, renowned translator Robert Fagles has captured the energy and poetry of Homer's original in a bold, contemporary idiom and given us an Odyssey to read aloud, to savor, and to treasure for its sheer lyrical mastery. This is an Odyssey to delight both the classicist and the general reader, and to captivate a new generation of Homer's students.

Robert Fagles's translation is a jaw-droppingly beautiful rendering of Homer's Odyssey, the most accessible and enthralling epic of classical Greece. Fagles captures the rapid and direct language of the original Greek, while telling the story of Odysseus in lyrics that ring with a clear, energetic voice. The story itself has never seemed more dynamic, the action more compelling, nor the descriptions so brilliant in detail. It is often said that every age demands its own translation of the classics. Fagles's work is a triumph because he has not merely provided a contemporary version of Homer's classic poem, but has located the right language for the timeless character of this great tale. Fagles brings the Odyssey so near, one wonders if the Hollywood adaption can be far behind. This is a terrific book.

Homer was probably born around 725BC on the Coast of Asia Minor, now the coast of Turkey, but then really a part of Greece. Homer was the first Greek writer whose work survives. He was one of a long line of bards, or poets, who worked in the oral tradition. Homer and other bards of the time could recite, or chant, long epic poems. Both works attributed to Homer – the Iliad and the Odyssey – are over ten thousand lines long in the original. Homer must have had an amazing memory but was helped by the formulaic poetry style of the time.

In the Iliad Homer sang of death and glory, of a few days in the struggle between the Greeks and the Trojans. Mortal men played out their fate under the gaze of the gods. The Odyssey is the original collection of tall traveller’s tales. Odysseus, on his way home from the Trojan War, encounters all kinds of marvels from one-eyed giants to witches and beautiful temptresses. His adventures are many and memorable before he gets back to Ithaca and his faithful wife Penelope. We can never be certain that both these stories belonged to Homer. In fact ‘Homer’ may not be a real name but a kind of nickname meaning perhaps ‘the hostage’ or ‘the blind one’. Whatever the truth of their origin, the two stories, developed around three thousand years ago, may well still be read in three thousand years’ time.

Book Description Paperback. Condition: New. Reissue. Language: English. Brand new Book. Literature's grandest evocation of life's journey, at once an ageless human story and an individual test of moral endurance, Homer's ancient Greek epic The Odyssey is translated by Robert Fagles with an introduction and notes by Bernard Knox in Penguin Classics.When Robert Fagles' translation of The Iliad was published in 1990, critics and scholars alike hailed it as a masterpiece. Here, one of the great modern translators presents us with The Odyssey, Homer's best-loved poem, recounting Odysseus' wanderings after the Trojan War. With wit and wile, the 'man of twists and turns' meets the challenges of the sea-god Poseidon, and monsters ranging from the many-headed Scylla to the cannibalistic Cyclops Polyphemus - only to return after twenty years to a home besieged by his wife Penelope's suitors. In the myths and legends retold in this immortal poem, Fagles has captured the energy of Homer's original in a bold, contemporary idiom.Seven greek cities claim the honour of being the birthplace of Homer (c. 8th-7th century BC), the poet to whom the composition of the Iliad and Odyssey are attributed. The Iliad is the oldest surviving work of Western literature, but the identity - or even the existence - of Homer himself is a complete mystery, with no reliable biographical information having survived.If you enjoyed The Odyssey, you might like Robert Fagles' translation of The Iliad, also available in Penguin Classics.'Wonderfully readable . Just the right blend of roughness and sophistication'Ted Hughes'A memorable achievement . Mr Fagles has been remarkably successful in finding a style that is of our time and yet timeless'Richard Jenkyns, The New York Times Book Review'His translation of The Odyssey is his best work yet'Garry Wills, New Yorker. Seller Inventory # AAZ9780143039952

The Odyssey (Paperback or Softback)