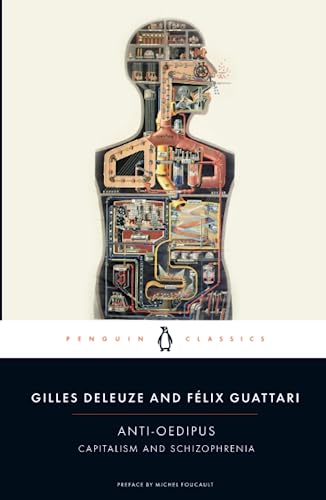 An "introduction to the nonfascist life" (Michel Foucault, from the Preface)

When it first appeared in France, Anti-Oedipus was hailed as a masterpiece by some and "a work of heretical madness" by others. In it, Gilles Deleuze and Félix Guattari set forth the following theory: Western society's innate herd instinct has allowed the government, the media, and even the principles of economics to take advantage of each person's unwillingness to be cut off from the group. What's more, those who suffer from mental disorders may not be insane, but could be individuals in the purest sense, because they are by nature isolated from society. More than twenty-five years after its original publication, Anti-Oedipus still stands as a controversial contribution to a much-needed dialogue on the nature of free thinking.

This is an essential text for feminists, literary theorists, social scientists, philosophers, and others interested in the problems of contemporary Western culture.

Gilles Deleuze was a prolific French philosopher and author of 25 books. A self-described "pure metaphysician," he was a professor of philosophy at the University of Paris VIII and was known for a style that forced readers to reevaluate their philosophical assumptions. Deleuze, along with close friend and colleague Feliz Guattari, wrote a two-volume work on anti-psychoanalytic social philosophy called Capitalism and Schizophrenia. The first volume, Anti-Oedipus, is their best-known work.

Felix Guattari was a French psychiatrist and philosopher. He founded the Society for Institutional Psychotherapy in 1965 and the Centre for Institutional Studies and Research in 1970. Trained as a psychoanalyst, he, along with close friend and colleague Gilles Deleuze, were instrumental figures in the anti-psychiatry movement, which challenged established viewpoints in psychoanalysis, philosophy, and sociology. The two wrote a two-volume work on anti-psychoanalytic social philosophy called Capitalism and Schizophrenia. The first volume, Anti-Oedipus, is their best-known work.

Michel Foucault, one of the leading philosophical thinkers of the 20th century, was born in Poitiers, France, in 1926. He lectured in universities throughout the world; served as director at the Institut Français in Hamburg, Germany and at the Institut de Philosophie at the Faculté des Lettres in the University of Clermont-Ferrand, France; and wrote frequently for French newspapers and reviews. His influence on generations of thinkers in the areas of sociology, queer theory, cultural studies, and critical thinking are not to be underestimated. Among his many books were the Foucault Reader, Society Must Be Defended, and Great Ideas.

At the time of his death in June 1984, he held a chair at France's most prestigious institutions, the Collčge de France. Foucault was the first public figure in France to die from HIV/AIDS.

Mark Seem is a philosophical writer and translator. His work includes Anti-Oedipus, the first of the two-volume work Capitalism and Schizophrenia.

Robert Hurley is a translator whose credits include translating the work of French philosophers Michael Foucault, Gilles Deleuze, Pierre Clastres, and Georges Bataille.