Items related to Bettyville: A Memoir 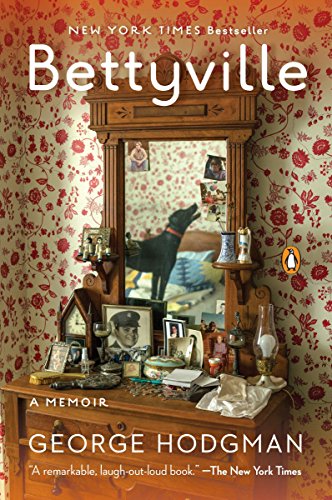 “The idea of a cultured gay man leaving New York City to care for his aging mother in Paris, Missouri, is already funny, and George Hodgman reaps that humor with great charm. But then he plunges deep, examining the warm yet fraught relationship between mother and son with profound insight and understanding.” —Alison Bechdel, author of Fun Home

When George Hodgman leaves Manhattan for his hometown of Paris, Missouri, he finds himself—an unlikely caretaker and near-lethal cook—in a head-on collision with his aging mother, Betty, a woman of wit and will. Will George lure her into assisted living? When hell freezes over. He can’t bring himself to force her from the home both treasure—the place where his father’s voice lingers, the scene of shared jokes, skirmishes, and, behind the dusty antiques, a rarely acknowledged conflict: Betty, who speaks her mind but cannot quite reveal her heart, has never really accepted the fact that her son is gay.

As these two unforgettable characters try to bring their different worlds together, Hodgman reveals the challenges of Betty’s life and his own struggle for self-respect, moving readers from their small town—crumbling but still colorful—to the star-studded corridors of Vanity Fair. Evocative of The End of Your Life Book Club and The Tender Bar, Hodgman’s New York Times bestselling debut is both an indelible portrait of a family and an exquisitely told tale of a prodigal son’s return.

“A remarkable, laugh-out-loud book . . . Rarely has the subject of elder care produced such droll human comedy, or a heroine quite on the mettlesome order of Betty Baker Hodgman. For as much as the book works on several levels (as a meditation on belonging, as a story of growing up gay and the psychic cost of silence, as metaphor for recovery), it is the strong-willed Betty who shines through.” —The New York Times

The Amazon Spotlight Pick for March 2015: When George Hodgman left Manhattan for Paris to visit his aging mother, he didn’t realize it would be the beginning of an unintended, and indeterminate tenure as a caregiver. Did I mention that it’s Paris, Missouri? They say you can’t go home again, and in Hodgman’s case, you can understand why he wouldn’t want to—Paris hadn’t proven to be the most hospitable place for someone coming to terms with their sexuality. This was compounded by the fact that Hodgman’s parents didn’t approve of who he “turned out to be,” which was as specific as they were willing to get on the matter. Any gaps in their understanding were filled with an insidious silence that kept this otherwise loving family at arm’s length. I haven’t forgotten what this book is called and, no doubt, you will fall in love with the impossible and endearing woman that is its namesake. But at its heart, Bettyville serves as a poignant cautionary tale about the dangers of leaving difficult things unsaid, and in these pages, Hodgman practices what he preaches. –Erin Kodicek

George Hodgman is a veteran magazine and book editor who has worked at Simon & Schuster, Vanity Fair, and Talk magazine. His writing has appeared in Entertainment Weekly, Interview, W, and Harper’s Bazaar, among other publications. He lives in New York City and Paris, Missouri.

Book Description Condition: New. All orders ship by next business day! This is a new paperback book. We are a small company and very thankful for your business!. Seller Inventory # 4CNO3H0006I7