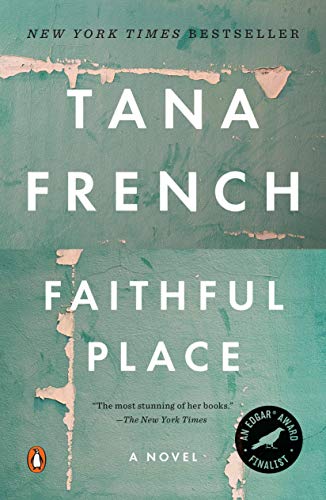 From Tana French, author of The Witch Elm, “the most important crime novelist to emerge in the past 10 years” (The Washington Post), the bestseller called “the most stunning of her books” (The New York Times) and a finalist for the Edgar Award.

Back in 1985, Frank Mackey was a nineteen-year-old kid with a dream of escaping hisi family's cramped flat on Faithful Place and running away to London with his girl, Rosie Daly. But on the night they were supposed to leave, Rosie didn't show. Frank took it for granted that she'd dumped him-probably because of his alcoholic father, nutcase mother, and generally dysfunctional family. He never went home again. Neither did Rosie. Then, twenty-two years later, Rosie's suitcase shows up behind a fireplace in a derelict house on Faithful Place, and Frank, now a detective in the Dublin Undercover squad, is going home whether he likes it or not.

Stef Penney: You have created a tapestry of interlocking characters who all work in law enforcement in Dublin, and so far you’ve turned the spotlight on three different police officers. . . Do you have a favorite? Have you found some harder to inhabit than others?

Tana French: Frank Mackey in Faithful Place was by far the most fun to write because he’s got that dark, abrasive Dublin sense of humor that surfaces even--or especially--at life’s worst moments. The hardest to get into was Scorcher Kennedy, in my new book, Broken Harbour--I’ve just finished the edits. I think it’s to do with the gap between the way Frank saw him in Faithful Place, where he was a supporting character, and the way he sees himself. Frank sees a rule-bound, up-himself, irritating git; but from Scorcher’s point of view, he’s a man struggling desperately to do the right thing in a world where you have to trust in the rules because your own mind is too fragile and slippery to trust. There’s a huge gap between the two perspectives, and it wasn’t easy to switch. That perspective shift is one of the things I enjoy most about writing a series of books, where a secondary character in one book becomes the narrator in the next--it lets me explore the way truth can be mutable and subjective, shaped by people’s own needs as much as by objective reality--but it’s also the toughest part of it.

Penney: You’re known for writing about Dublin. Can you see yourself going anywhere else as the setting for a book?

French: I’ll be sticking with Dublin--for the foreseeable future, anyway. It’s the only city where I know all the little details--the sense of humor, the connotations of the accents, where to get a good pint and where not to go after dark. Setting a book in a place I didn’t know this intimately would feel very dislocated. I think crime is very deeply rooted in its setting--it happens everywhere but the form it takes is shaped by the fears and desires of the society where it happens--and so crime novels are rooted in setting, too. Both In the Woods and The Likeness deal with the relationship between past and present--how to balance the two without destroying either--and that’s a question that Ireland’s been struggling (and often failing) to deal with over the past twenty years. It wasn’t a deliberate choice to make the books “relevant”; it’s just that since the issue was a central part of the world I lived in while I was coming up with the books, it soaked into them. If I set a book anywhere else, that connection wouldn’t be there. Plus, I love Dublin. I care about its fears and desires with a passion that I don’t feel for any other place. Faithful Place, especially, is a love song to Dublin, its bad side as well as its good. I can’t imagine writing about somewhere I don’t care about so strongly.

Penney: The Mackeys in Faithful Place are extraordinarily vivid, but it’s a terrifying, bleak portrait of family life. Does this relate to anything in your life? Or, if not, what made you interested in writing about such a family?

French: Thank God, my family’s nothing like the Mackeys! I had an unfashionably happy childhood. But I’ve always been most interested in writing about things I don’t know about. That’s at the heart of Faithful Place, in a lot of ways. It’s about a big family, and a viciously dysfunctional one, neither of which I’ve experienced. And it’s also about a family that’s very deeply rooted in Dublin, and specifically in the centuries-old community of Faithful Place. Those roots have shaped everything the Mackeys are. I’ve always been fascinated by that kind of rooted life because it’s something I’ll never have--my parents have a handful of nationalities between them, I grew up in several continents, I’m an international brat. . . Writing about something so far from my own life is the closest I’ll ever come to understanding it.

Penney: Down to nuts and bolts: How do you write? Are you very disciplined? I imagine you must be since you’re quite prolific!

French: Hah, I wish. I’m not one of nature’s disciplined types. Back in college, I had a reputation for going into the library only to convince other people to come out for coffee, and I haven’t changed that much. Every morning, I fight the urge to call my friends and see if I can persuade anyone to come out and play. These days, though, my disciplined side almost always wins. I work six days a week, about seven hours a day. What makes the difference is that I love what I do and I feel ridiculously lucky to be doing it. After years of acting, where you’re dependent on other people to decide whether you’re allowed to work or not, being able to work every day feels like a massive gift. That considerably lessens the urge to goof off.

Penney: Any TV or film adaptations in the works? Because there should be! If yes, how did you find the experience?

French: Paramount has optioned The Likeness and In the Woods, and I’ve just heard that Likeness is in development. I’m not totally clear on exactly what that means, but it sounds very cool but slightly intimidating. I’m dying to see what comes out at the other end, but I deliberately didn’t even try to ask for any role in the adaptation process because anything I know about writing fiction is probably worthless when it comes to writing film. They’re such utterly different genres that the book’s going to have to change in ways I can’t begin to picture.

Penney: I loved the mythic quality of the backstory in In the Woods--and the fact that in the end you refused to answer the question. Did you encounter any resistance from publishers over the ending?

French: No resistance from publishers. I was expecting it, because the ending does break genre convention--I was all ready to argue my case that this was the only ending with integrity and anything else would be forced and artificial, sacrificing character truth for cheap closure. But none of the editors ever suggested changing it. I do get e-mails from readers who hate the ending. Fair enough; the genre comes with expectation of closure and the book doesn’t provide it, and some people have real trouble with that. But I also get e-mails from readers who love the ending and who would have been furious if I’d sacrificed that integrity in order to stick to the rules. There was no way I could have written something that would make both types of readers happy. All I could do was write the best book I could and hope there were enough people out there who like the same kind of thing that I do.

Tana French is also the author of In the Woods, The Likeness, Faithful Place, Broken Harbor, The Secret Place and The Trespasser. Her books have won awards including the Edgar, Anthony, Macavity, and Barry awards, the Los Angeles Times Award for Best Mystery/Thriller, and the Irish Book Award for Crime Fiction. She lives in Dublin with her family.