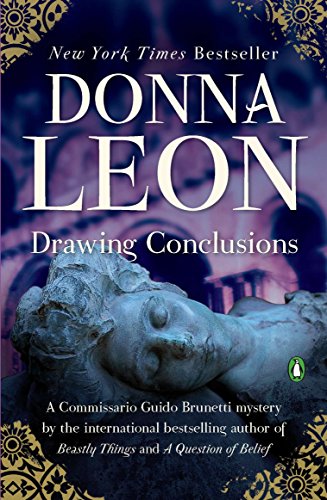 Twenty years ago Venetian Commissario Guido Brunetti and his creator, Donna Leon, first introduced readers to the delights-and dangers-of Venice. Now they have millions of devoted fans. In Drawing Conclusions, a young woman arrives home and senses that all is not right in the apartment below. When she investigates, she finds her neighbor lying lifeless on the floor. The autopsy shows that the widow's death was due to a heart attack, but Brunetti is convinced that things are not as straightforward as they seem. With her signature combination of humanity, nuanced detail, and psychological insight, Leon's twentieth Brunetti mystery reaffirms her place in the pantheon of crime fiction.

About the Author:
A New Yorker of Irish/Spanish descent, Donna Leon first went to Italy in 1965, returning regularly over the next decade or so while pursuing a career as an academic in the States and then later in Iran, China and finally Saudi Arabia. It was after a period in Saudi Arabia, which she found ‘damaging physically and spiritually’ that Donna decided to move to Venice, where she has now lived for over twenty years.

Her debut as a crime fiction writer began as a joke: talking in a dressing room in Venice’s opera-house La Fenice after a performance, Donna and a singer friend were vilifying a particular German conductor. From the thought ‘why don’t we kill him?’ and discussion of when, where and how, the idea for Death at La Fenice took shape, and was completed over the next four months.

Donna Leon is the crime reviewer for the London Sunday Times and is an opera expert. She has written the libretto for a comic opera, entitled Dona Gallina. Set in a chicken coop, and making use of existing baroque music, Donna Gallina was premiered in Innsbruck. Brigitte Fassbaender, one of the great mezzo-sopranos of our time, and now head of the Landestheater in Innsbruck, agreed to come out of retirement both to direct the opera and to play the part of the witch Azuneris (whose name combines the names of the two great Verdi villainesses Azucena and Amneris).

Review:
“Donna Leon’s 20th Venetian mystery featuring her compassionate police detective, Commissario Guido Brunetti, epitomizes what we treasure most about this series: a feeling for the life of a sublimely beautiful city and a sensitivity to the forces that are reshaping it. Not to mention the pleasure of being in Brunetti’s company when this shrewd but scrupulously honest man is having a crisis of ethics at the flower market or trying to pry information from a hostile nun.” — Marilyn Stasio, New York Times Book Review

“By now, with the arrival of Donna Leon’s 20th Commissario Guido Brunetti Mystery, the Venetian police commissioner seems almost as much an institution as the city’s venerable buildings. ... In an age of diminished civic and religious authority, the commissario—as his investigation proceeds—must make Jesuitical decisions of his own about guilt and innocence, punishment and absolution. In this finely written account, he comes down (as we know he will) on the side of the angels.” — Tom Nolan, The Wall Street Journal

“This fine novel is Leon’s 20th mystery featuring Commissario Guido Brunetti, the unparalleled Venetian police investigator who enlivens this intelligent series. ... As always, Brunetti’s investigative acumen, his patience, and most of all, his profound comprehension of the human psyche enable him to bring the case to a closure of sorts. Yet the powerful conclusions does not, in fact, directly divulge the solution, and it is this haunting ambiguity that renders Drawing Conclusions Leon’s most provocative novel to date.  ... VERDICT: Aficionados of literary mysteries such as those written by P.D. James and Michael Dibdin will revel in this stellar book. If you read only one mystery this year, make it this one.” — Lynne F. Maxwell, Library Journal (starred review)

“Leon’s twentieth novel starring Venetian police Commissario Guido Brunetti is one of her best.  ... When [Brunetti] muses, the reader listens almost hypnotically, transfixed by the somehow ennobling ordinariness of this remarkable man’s humanity but also by the subtlety of his mind and his absolute refusal to succumb to the tyranny of bureaucrats and moralists.  ... Leon’s popularity among mystery fans has grown steadily, but over the last several years, she has become a must-read for all those who favor character-driven crime stories.” — Bill Ott, Booklist (starred review)

“There is always doubt mixed with anticipation before diving into the latest in a favorite mystery series. The uncertainty is always there -- will it deliver the same fascination as previous books? Or will it disappoint? ... The compelling characters and complex plot in Leon's Drawing Conclusions place it among her best. The atmosphere of the city, along with Leon's sharp insights and powerful narrative, validate her often-recognized status as a master of literary crime fiction.” — Merle Minda, Minneapolis Star-Tribune