Items related to Shadow of Night (All Souls Trilogy, Bk 2) (All Souls... 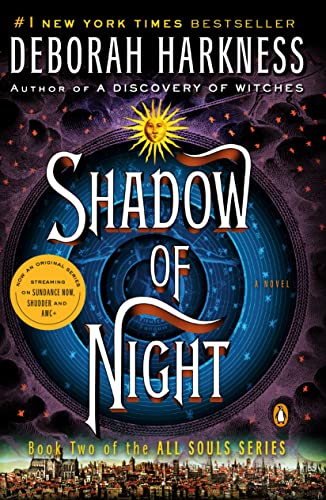 The #1 New York Times–bestselling sequel to A Discovery of Witches, book two of the All Souls Trilogy—“as enchanting, engrossing, and impossible to put down as its predecessor” (Miami Herald).

Look for the hit TV series “A Discovery of Witches” airing Sundays on AMC and BBC America, and streaming on Sundance Now and Shudder.

Picking up from A Discovery of Witches’ cliffhanger ending, Shadow of Night takes Diana and Matthew on a trip through time to Elizabethan London, where they are plunged into a world of spies, magic, and a coterie of Matthew’s old friends, the School of Night. As the search for Ashmole 782 deepens and Diana seeks out a witch to tutor her in magic, the net of Matthew’s past tightens around them, and they embark on a very different—and vastly more dangerous—journey.

Amazon Best Books of the Month, July 2012: Deborah Harkness burst onto the scene with her 2011 debut A Discovery of Witches, a book that introduced legions of fans to Diana Bishop, an Oxford scholar, and Matthew Clairmont, a handsome geneticist. Diana also happened to be a witch, and Matthew a vampire—and readers couldn’t get enough of them, right up to the thrilling cliffhanger ending. Now Shadow of Night picks up where the first book leaves off, with Diana and Matthew entering Elizabethan London, where Mathew is part of the mysterious School of Night, a group that counts Christopher Marlowe and Sir Walter Raleigh among its members. Characterization, a great eye for detail, and a story that takes some notable twists and turns make this a great novel that will more than live up to eager fans’ expectations. It’s even better than the first. -- Chris Schluep

Deborah Harkness is the number one New York Times bestselling author of A Discovery of Witches, Shadow of Night, and The Book of Life. A history professor at the University of Southern California, Harkness has received Fulbright, Guggenheim, and National Humanities Center fellowships. She lives in Los Angeles.

Shadow of Night (Paperback or Softback)