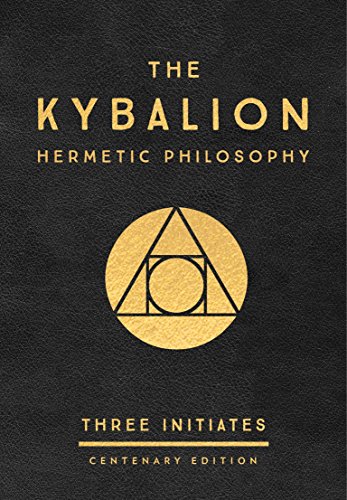 The most popular occult work of the twentieth century--now in a hardbound edition that evokes the original volume, with a new introduction by scholar of mysticism Richard Smoley.

For generations, readers have debated the origins and studied the knowledge of this mysterious exploration of Hermetic wisdom, attributed to "Three Initiates."

Now in its second century, The Kybalion is restored to hardcover in a beautiful vegan-leather casing with gold stamping, acid-free paper, gold-foil page edges, and a red ribbon place marker. This commemorative volume evokes the appearance of the occult landmark's first edition.

The new introduction by Richard Smoley, a celebrated scholar of mystical traditions, makes this a historical keepsake.

“The lips of wisdom are closed, except to the ears of Understanding.” —The Kybalion.

“Where fall the footsteps of the Master, the ears of those ready for his Teaching open wide.” —The Kybalion.

“When the ears of the student are ready to hear, then cometh the lips to fill them with Wisdom.” —The Kybalion.        So that according to the Teachings, the passage of this book to those ready for the instruction will attract the attention of such as are prepared to receive the Teaching. And, likewise, when the pupil is ready to receive the truth, then will this little book come to him, or her. Such is The Law. The Hermetic Principle of Cause and Effect, in its aspect of The Law of Attraction, will bring lips and ear together—pupil and book in company. So mote it be!         2

“The Principles of Truth are Seven; he who knows these, understandingly, possesses the Magic Key before whose touch all the Doors of the Temple fly open.” —The Kybalion.

I. The Principle of Mentalism.

“THE ALL is MIND; The Universe is Mental.” —The Kybalion.        This Principle embodies the truth that “All is Mind.” It explains that THE ALL (which is the Substantial Reality underlying all the outward manifestations and appearances which we know under the terms of “The Material Universe”; the “Phenomena of Life”; “Matter”; “Energy”; and, in short, all that is apparent to our material senses) is SPIRIT, which in itself is UNKNOWABLE and UNDEFINABLE, but which may be considered and thought of as AN UNIVERSAL, INFINITE, LIVING MIND. It also explains that all the phenomenal world or universe is simply a Mental Creation of THE ALL, subject to the Laws of Created Things, and that the universe, as a whole, and in its parts or units, has its existence in the Mind of THE ALL, in which Mind we “live and move and have our being.” This Principle, by establishing the Mental Nature of the Universe, easily explains all of the varied mental and psychic phenomena that occupy such a large portion of the public attention, and which, without such explanation, are non-understandable and defy scientific treatment. An understanding of this great Hermetic Principle of Mentalism enables the individual to readily grasp the laws of the Mental Universe, and to apply the same to his well-being and advancement. The Hermetic Student is enabled to apply intelligently the great Mental Laws, instead of using them in a haphazard manner. With the Master-Key in his possession, the student may unlock the many doors of the mental and psychic temple of knowledge, and enter the same freely and intelligently. This Principle explains the true nature of “Energy,” “Power,” and “Matter,” and why and how all these are subordinate to the Mastery of Mind. One of the old Hermetic Masters wrote, long ages ago: “He who grasps the truth of the Mental Nature of the Universe is well advanced on The Path to Mastery.” And these words are as true to-day as at the time they were first written. Without this Master-Key, Mastery is impossible, and the student knocks in vain at the many doors of The Temple.

II. The Principle of Correspondence.

“As above, so below; as below, so above.” —The Kybalion.        This Principle embodies the truth that there is always a Correspondence between the laws and phenomena of the various planes of Being and Life. The old Hermetic axiom ran in these words: “As above, so below; as below, so above.” And the grasping of this Principle gives one the means of solving many a dark paradox, and hidden secret of Nature. There are planes beyond our knowing, but when we apply the Principle of Correspondence to them we are able to understand much that would otherwise be unknowable to us. This Principle is of universal application and manifestation, on the various planes of the material, mental, and spiritual universe—it is an Universal Law. The ancient Hermetists considered this Principle as one of the most important mental instruments by which man was able to pry aside the obstacles which hid from view the Unknown. Its use even tore aside the Veil of Isis to the extent that a glimpse of the face of the goddess might be caught. Just as a knowledge of the Principles of Geometry enables man to measure distant suns and their movements, while seated in his observatory, so a knowledge of the Principle of Correspondence enables Man to reason intelligently from the Known to the Unknown. Studying the monad, he understands the archangel.

III. The Principle of Vibration.

“Nothing rests; everything moves; everything vibrates.” —The Kybalion.        This Principle embodies the truth that “everything is in motion”; “everything vibrates”; “nothing is at rest”; facts which Modern Science endorses, and which each new scientific discovery tends to verify. And yet this Hermetic Principle was enunciated thousands of years ago, by the Masters of Ancient Egypt. This Principle explains that the differences between different manifestations of Matter, Energy, Mind, and even Spirit, result largely from varying rates of Vibration. From THE ALL, which is Pure Spirit, down to the grossest form of Matter, all is in vibration—the higher the vibration, the higher the position in the scale. The vibration of Spirit is at such an infinite rate of intensity and rapidity that it is practically at rest—just as a rapidly moving wheel seems to be motionless. And at the other end of the scale, there are gross forms of matter whose vibrations are so low as to seem at rest. Between these poles, there are millions upon millions of varying degrees of vibration. From corpuscle and electron, atom and molecule, to worlds and universes, everything is in vibratory motion. This is also true on the planes of energy and force (which are but varying degrees of vibration); and also on the mental planes (whose states depend upon vibrations); and even on to the spiritual planes. An understanding of this Principle, with the appropriate formulas, enables Hermetic students to control their own mental vibrations as well as those of others. The Masters also apply this Principle to the conquering of Natural phenomena, in various ways. “He who understands the Principle of Vibration, has grasped the sceptre of power,” says one of the old writers.

Book Description J.P.Tarcher,U.S./Perigee Bks.,U.S., United States, 2018. Hardback. Condition: New. Centennial. Language: English. Brand new Book. The most popular occult work of the twentieth century--now in a hardbound edition that evokes the original volume, with a new introduction by scholar of mysticism Richard Smoley. For generations, readers have debated the origins and studied the knowledge of this mysterious exploration of Hermetic wisdom, attributed to Three Initiates. Now in its second century, The Kybalion is restored to hardcover in a beautiful vegan-leather casing with gold stamping, acid-free paper, gold-foil page edges, and a red ribbon place marker. This commemorative volume evokes the appearance of the occult landmark's first edition. The new introduction by Richard Smoley, a celebrated scholar of mystical traditions, makes this a historical keepsake. Seller Inventory # ABZ9780143131687

8. Kybalion : A Study of the Hermetic Philosophy of Ancient Egypt and Greece: Three Initiates

Book Description TarcherPerigee, 2018. Hardcover. Condition: New. Hardcover. For generations, readers have debated the origins and studied the knowledge of this mysterious exploration of Hermetic wisdom, attributed to Three Initiates. Now in its second century, The.Shipping may be from multiple locations in the US or from the UK, depending on stock availability. 176 pages. 0.310. Seller Inventory # 9780143131687