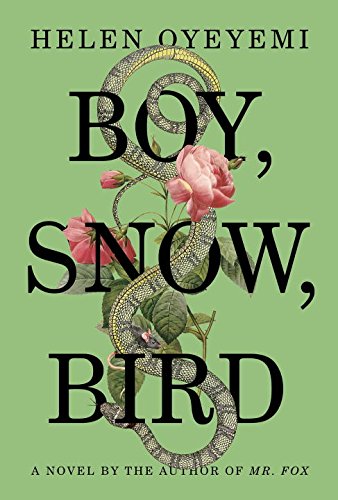 In the winter of 1953, Boy Novak arrives by chance in a small town in Massachusetts,  looking, she believes, for beauty—the opposite of the life she’s left behind in  New York . She marries a local widower and becomes stepmother to his winsome  daughter, Snow Whitman.

A wicked stepmother is a creature Boy never imagined she’d become, but elements  of the familiar tale of aesthetic obsession begin to play themselves out when the  birth of Boy’s daughter, Bird, who is dark-skinned, exposes the Whitmans as lightskinned  African Americans passing for white. Among them, Boy, Snow, and Bird  confront the tyranny of the mirror to ask how much power surfaces really hold.

Dazzlingly inventive and powerfully moving , Boy, Snow, Bird is an astonishing and  enchanting novel. With breathtaking feats of imagination, Helen Oyeyemi confirms  her place as one of the most original and dynamic literary voices of our time.

Helen Oyeyemi  is the author of five novels, most recently White Is for Witching, which won a 2010 Somerset Maugham Award, and Mr. Fox, which won a 2012 Hurston/Wright Legacy Award. In 2013, she was named one of Granta’s Best Young British Novelists. She lives in Prague.