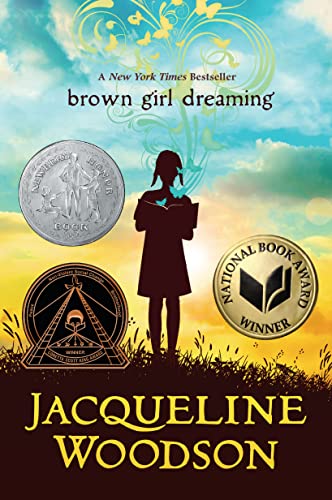 Raised in South Carolina and New York, Woodson always felt halfway home in each place. In vivid poems, she shares what it was like to grow up as an African American in the 1960s and 1970s, living with the remnants of Jim Crow and her growing awareness of the Civil Rights movement. Touching and powerful, each poem is both accessible and emotionally charged, each line a glimpse into a child’s soul as she searches for her place in the world. Woodson’s eloquent poetry also reflects the joy of finding her voice through writing stories, despite the fact that she struggled with reading as a child. Her love of stories inspired her and stayed with her, creating the first sparks of the gifted writer she was to become.

A 2016 National Book Award finalist for her adult novel, ANOTHER BROOKLYN

"Ms. Woodson writes with a sure understanding of the thoughts of young people, offering a poetic, eloquent narrative that is not simply a story . . . but a mature exploration of grown-up issues and self-discovery.”—The New York Times Book Review

Jacqueline Woodson (www.jacquelinewoodson.com) is the 2014 National Book Award Winner for her New York Times bestselling memoir Brown Girl Dreaming, which was also a recipient of the Coretta Scott King Award, a Newbery Honor Award, the NAACP Image Award and the Sibert Honor Award. Woodson was recently named the Young People’s Poet Laureate by the Poetry Foundation. She is the author of more than two dozen award-winning books for young adults, middle graders and children; among her many accolades, she is a four-time Newbery Honor winner, a three-time National Book Award finalist, and a two-time Coretta Scott King Award winner. Her books include The Other Side, Each Kindness, the Caldecott Honor Book Coming on Home Soon; the Newbery Honor winners Feathers, Show Way, and After Tupac and D Foster, and Miracle’s Boys which received the LA Times Book Prize and the Coretta Scott King Award and was adapted into a miniseries directed by Spike Lee. Jacqueline is also the recipient of the Margaret A. Edwards Award for lifetime achievement for her contributions to young adult literature, the winner of the Jane Addams Children’s Book Award,  the 2013 United States nominee for the Hans Christian Andersen Award, a 2016 National Book Award finalist for her adult novel Another Brooklyn, and received the 2018 Children's Literature Legacy Award. She lives with her family in Brooklyn, New York.

I am born on a Tuesday at the University Hospital
Columbus, Ohio
USA—
a country caught

between Black and White.

I am born not long from the time
or far from the place
where
my great, great grandparents
worked the deep rich land
unfree
dawn till dusk
unpaid
drank cool water from scooped out gourds
looked up and followed
the sky’s mirrored constellation
to freedom.

I am born as the south explodes,
too many people too many years
enslaved then emancipated
but not free, the people
who look like me
keep fighting
and marching
and getting killed
so that today—
February 12, 1963
and every day from this moment on,
brown children, like me, can grow up
free. Can grow up
learning and voting and walking and riding
wherever we want.

I am born in Ohio but
the stories of South Carolina already run
like rivers
through my veins.
second daughter’s second day on earth

In Birmingham, Alabama, Martin Luther King Jr.
is planning a march on Washington, where
John F. Kennedy is president.
In Harlem, Malcolm X is standing on a soapbox
talking about a revolution.

Outside the window of University Hospital,
snow is slowly falling. So much already
covers this vast Ohio ground.

In Montgomery, only seven years have passed
since Rosa Parks refused
to give up
her seat on a city bus.

I am born brown-skinned, black-haired
and wide-eyed.
I am born Negro here and Colored there

and somewhere else,
the Freedom Singers have linked arms,
their protests rising into song:
Deep in my heart, I do believe
that we shall overcome someday.

and somewhere else, James Baldwin
is writing about injustice, each novel,
each essay, changing the world.

Not even three years have passed since a brown girl
named Ruby Bridges
walked into an all-white school.
Armed guards surrounded her while hundreds
of white people spat and called her names.

She was six years old.

I do not know if I’ll be strong like Ruby.
I do not know what the world will look like
when I am finally able to walk, speak, write . . .
Another Buckeye!
the nurse says to my mother.
Already, I am being named for this place.
Ohio. The Buckeye State.
My fingers curl into fists, automatically
This is the way, my mother said,
of every baby’s hand.
I do not know if these hands will become
Malcolm’s—raised and fisted
or Martin’s—open and asking
or James’s—curled around a pen.
I do not know if these hands will be
Rosa’s
or Ruby’s
gently gloved
and fiercely folded
calmly in a lap,
on a desk,
around a book,
ready
to change the world . . .

My great-great-grandfather on my father’s side
was born free in Ohio,

Built his home and farmed his land,
then dug for coal when the farming
wasn’t enough. Fought hard
in the war. His name in stone now
on the Civil War Memorial:

A long time dead but living still
among the other soldiers
on that monument in Washington, D.C.

His son was sent to Nelsonville
lived with an aunt

William Woodson
the only brown boy in an all-white school.

You’ll face this in your life someday,
my mother will tell us
over and over again.
A moment when you walk into a room and

It’ll be scary sometimes. But think of William Woodson
and you’ll be all right.

I cannot write a word yet but at three,
I now know the letter J
love the way it curves into a hook
that I carefully top with a straight hat
the way my sister has taught me to do. Love
the sound of the letter and the promise
that one day this will be connected to a full name,

that I will be able to write

Without my sister’s hand over mine,
making it do what I cannot yet do.

How amazing these words are that slowly come to me.
How wonderfully on and on they go.

Will the words end, I ask
whenever I remember to.

Nope, my sister says, all of five years old now,
and promising me

Saturday night smells of biscuits and burning hair.
Supper done and my grandmother has transformed
the kitchen into a beauty shop. Laid across the table
is the hot comb, Dixie Peach hair grease,
horsehair brush, parting stick
and one girl at a time.
Jackie first, my sister says,
our freshly washed hair damp
and spiraling over toweled shoulders
and pale cotton nightgowns.
She opens her book to the marked page,
curls up in a chair pulled close
to the wood-burning stove, bowl of peanuts in her lap.
The words
in her books are so small, I have to squint
to see the letters. Hans Brinker or The Silver Skates.
The House at Pooh Corner. Swiss Family Robinson.
Thick books
dog-eared from the handing down from neighbor
to neighbor. My sister handles them gently,
marks the pages with torn brown pieces
of paper bag, wipes her hands before going
beyond the hardbound covers.
Read to me, I say, my eyes and scalp already stinging
from the tug of the brush through my hair.
And while my grandmother sets the hot comb
on the flame, heats it just enough to pull
my tight curls straighter, my sister’s voice
wafts over the kitchen,
past the smell of hair and oil and flame, settles
like a hand on my shoulder and holds me there.
I want silver skates like Hans’s, a place
on a desert island. I have never seen the ocean
but this, too, I can imagine—blue water pouring
over red dirt.
As my sister reads, the pictures begin forming
as though someone has turned on a television,
lowered the sound,
pulled it up close.
Grainy black-and-white pictures come slowly at me
Deep. Infinite. Remembered

On a bright December morning long ago . . .

My sister’s clear soft voice opens up the world to me.
I lean in
so hungry for it.

No one believes me when I tell them
I am writing a book about butterflies,
even though they see me with the Childcraft encyclopedia
heavy on my lap opened to the pages where
the monarch, painted lady, giant swallowtail and
queen butterflies live. Even one called a buckeye.

When I write the first words
Wings of a butterfly whisper . . .

no one believes a whole book could ever come
from something as simple as
butterflies that don’t even, my brother says,
live that long.

But on paper, things can live forever.
On paper, a butterfly
never dies.

Book Description Condition: New. All orders ship by next business day! This is a new paperback book. For USED books, we cannot guarantee supplemental materials such as CDs, DVDs, access codes and other materials. We are a small company and very thankful for your business!. Seller Inventory # 4CNO3J001QLB

Book Description Paperback. Condition: New. Reprint. Language: English. Brand new Book. Jacqueline Woodson's National Book Award and Newbery Honor winner is a powerful memoir that tells the moving story of her childhood in mesmerizing verse. A President Obama O Book Club pickRaised in South Carolina and New York, Woodson always felt halfway home in each place. In vivid poems, she shares what it was like to grow up as an African American in the 1960s and 1970s, living with the remnants of Jim Crow and her growing awareness of the Civil Rights movement. Touching and powerful, each poem is both accessible and emotionally charged, each line a glimpse into a child's soul as she searches for her place in the world. Woodson's eloquent poetry also reflects the joy of finding her voice through writing stories, despite the fact that she struggled with reading as a child. Her love of stories inspired her and stayed with her, creating the first sparks of the gifted writer she was to become. Includes 7 additional poems, including Brown Girl Dreaming. Praise for Jacqueline Woodson: Ms. Woodson writes with a sure understanding of the thoughts of young people, offering a poetic, eloquent narrative that is not simply a story . . . but a mature exploration of grown-up issues and self-discovery."--The New York Times Book Review. Seller Inventory # ABZ9780147515827