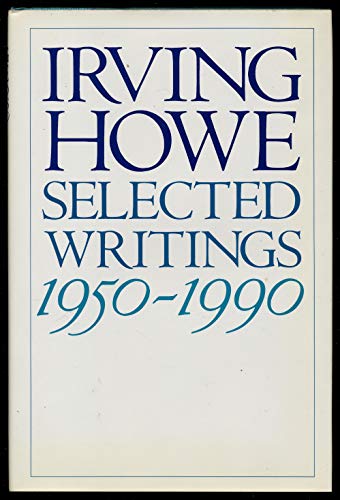 Essays from four decades discuss contemporary literature, socialism and communism, the Jewish experience, and other subjects

Irving Howe (June 11, 1920 – May 5, 1993), was an American literary and social critic. He was born as Irving Horenstein in The Bronx, New York, as a son of immigrants who ran a small grocery store that went out of business during the Great Depression. He never publicly explained his name change from "Horenstein" to "Howe."


Like many New York Intellectuals, Howe attended City College and graduated in 1940, alongside Daniel Bell and Irving Kristol. He served in the U.S. Army during World War II. Upon his return, he began writing literary and cultural criticism for the influential Partisan Review and became a frequent essayist for Commentary, Politics, The Nation, The New Republic, and The New York Review of Books. In 1954, Howe helped found the intellectual quarterly Dissent, which he edited until his death in 1993. In the 1950's Howe taught English and Yiddish literature at Brandeis University in Waltham, MA. He used the Howe and Greenberg Treasury of Yiddish Stories as the text for a course on the Yiddish story at a time when few were spreading knowledge or appreciation of these works in American colleges and universities.

Since his CCNY days, Howe was committed to left-wing politics. He was a member of the Young People's Socialist League and then Max Shachtman's Workers Party, where Shactman made Howe his understudy. After 1948, he joined the Independent Socialist League, where he was a central leader. He left the ISL in the early 1950s. As the request of his friend Michael Harrington, he helped co-found the Democratic Socialist Organizing Committee in the early 1970s. DSOC merged into the Democratic Socialists of America in 1982, with Howe as a vice-chair. He was a vociferous opponent of both Soviet totalitarianism and McCarthyism, called into question standard Marxist doctrine, and came into conflict with the New Left after criticizing their unmitigated radicalism. Later in life, his politics gravitated toward more pragmatic democratic socialism and foreign policy, a position still represented in the idiosyncratic political and social arguments of Dissent.

Known for literary criticism as well social and political activism, Howe wrote seminal studies on Thomas Hardy, William Faulkner, politics and the novel, and a sweeping cultural history of Eastern European Jews in America entitled World of Our Fathers. He also edited and translated many Yiddish stories, and commissioned the first English translation of Isaac Bashevis Singer for the Partisan Review. He also wrote A Margin of Hope, his autobiography, and Socialism and America.

A biography of Howe, entitled Irving Howe: A Life of Passionate Dissent, was published by Gerald Sorin.

Here we see one of the shrewdest, most civilized minds of our day in the interpenetrating roles of literary, social and political critic. In Howe's discussions of individual writers, one is struck by the rightness of his apercus: Celine, "maestro of bad smells," whose antiheroes go a step beyond Dostoyevski's "underground man" by embracing rather than fearing nihilism; Sholom Aleichem, whose funny-sad stories about the Jews of Eastern Europe dispense "a judgment of love through the medium of irony"; Dickens's semi-mythic Fagin, "a monster drawn from the bad dreams of Christianity." Howe scrutinizes, among others, George Eliot, Babel, Faulkner, Solzhenitsyn (now declined, he asserts, into shrill egotism), and brilliantly pans gold in Frost (one might have wished for more poetry criticism, however). In the sociopolitical essays, he has sharp words for the Reagan era, "a moment of moral smallness," and laments, while attempting to explain, the failure in America of liberalism and socialism. Fire, insight and humanity are Howe's hallmarks.
Copyright 1990 Reed Business Information, Inc.