Items related to Linear Algebra and Its Applications, 3rd Edition 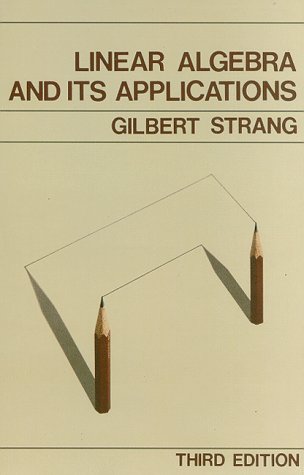 With a highly applied and computational focus, this book combines the important underlying theory with examples from electrical engineering, computer science, physics, biology and economics. An expanded list of computer codes in an appendix and more computer-solvable exercises in the text reflect Strang's interest in computational linear algebra. Many exercises appear in the sections and in the chapter reviews. Exercises are simple but instructive.

Gilbert Strang is Professor of Mathematics at the Massachusetts Institute of Technology and an Honorary Fellow of Balliol College. He was an undergraduate at MIT and a Rhodes Scholar at Oxford. His doctorate was from UCLA and since then he has taught at MIT. He has been a Sloan Fellow and a Fairchild Scholar and is a Fellow of the American Academy of Arts and Sciences. Professor Strang has published a monograph with George Fix, "An Analysis of the Finite Element Method", and has authored six widely used textbooks. He served as President of SIAM during 1999 and 2000 and he is Chair of the U.S. National Committee on Mathematics for 2003-2004.

5. Linear Algebra and Its Applications