Items related to Lectures on Literature 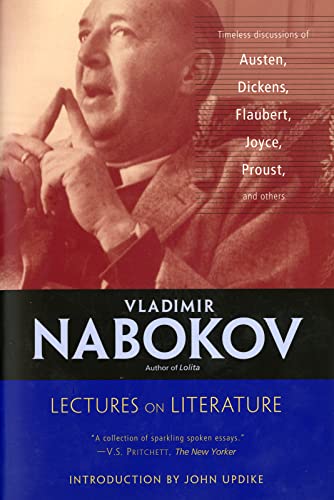 For two decades, first at Wellesley and then at Cornell, Nabokov introduced undergraduates to the delights of great fiction. Here, collected for the first time, are his famous lectures, which include Mansfield Park, Bleak House, and Ulysses. Edited and with a Foreword by Fredson Bowers; Introduction by John Updike; illustrations.

Vladimir Nabokov (1899-1977), Russian-born poet, novelist, literary critic, translator, and essayist was awarded the National Medal for Literature for his life's work in 1973. He taught literature at Wellesley, Stanford, Cornell, and Harvard. He is the author of many works including Lolita, Pale Fire, Ada, and Speak, Memory.

Not really essays, not genial and general E. M. Forster-ish talks either, nor stirring defenses nor rhetorical destructions, these lectures Nabokov prepared and gave at Cornell in the Fifties are just that: he talks and reads, we listen (the same general approach - heirophant picking out the mystery from the dross - that Nabokov used in his own fiction); and literature is taken apart like a boxful of toys: "impersonal imagination and artistic delight," "the supremacy of the detail over the general, of the part that is more alive than the whole." There are diagrams and drawings, quiddities made visual: a map of Sotherton Court in Jane Austen's Mansfield Park; exactly what kind of beetle Gregor Samsa turned into in "The Metamorphosis" the facade of 7 Eccles St., Bloom's house in Ulysses; what Odette's orchid looked like in Swann's Way. The more specific and crammed the writer, the more specific and crammed Nabokov's lecture: Dickens, Flaubert, Joyce. He finds Bleak House's tricks delicious, the richness and the pity; in Ulysses he swats away the Freudian interpretations ("a thousand and one nights [made] into a convention of Shriners") in favor of the devilish intricacy of Joycean synchronicity: "the hopeless past, the ridiculous and tragic present, and the pathetic future." Where sheer lush orchestration is less the thing, Nabokov falls back on thematic layering and transformation; before Stevenson's "Dr. Jekyll and Mr. Hyde" and Kafka's "The Metamorphosis" he is almost brief, enchantedly synopsizing although with microscopic attention still. In Nabokov a crankiness is always near the surface (here he rants against movies, even music); and he betrays a certain anxiety by detailing so much, as though a great work might try and fool him: there's something at the same time eccentric and regimental to his appreciation. But finally there is a personal, fussy, high rapture to these lessons and illustrations, not quite analytical (Nabokov was too defensive and contentious for analysis - maybe too brilliant, too) - more a delight in literature-as-camouflage. Distinctive and demanding. (Kirkus Reviews )

5. Lectures on Literature (Paperback or Softback)

Book Description Paperback. Condition: New. Paperback. For two decades, first at Wellesley and then at Cornell, Nabokov introduced undergraduates to the delights of great fiction. Here, collected for the first time, are his famous lectures, wh.Shipping may be from multiple locations in the US or from the UK, depending on stock availability. 416 pages. 0.454. Seller Inventory # 9780156027755