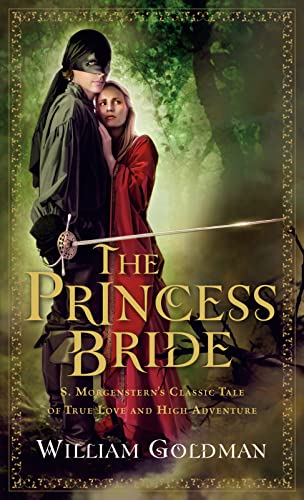 Anyone who lived through the 1980s may find it impossible—inconceivable, even—to equate The Princess Bride with anything other than the sweet, celluloid romance of Westley and Buttercup, but the film is only a fraction of the ingenious storytelling you'll find in these pages. Rich in character and satire, the novel is set in 1941 and framed cleverly as an “abridged” retelling of a centuries-old tale set in the fabled country of Florin that's home to “Beasts of all natures and descriptions. Pain. Death. Brave men. Coward men. Strongest men. Chases. Escapes. Lies. Truths. Passions.”

Goldman frames the fairy tale with an "autobiographical" story: his father, who came from Florin, abridged the book as he read it to his son. Now, Goldman is publishing an abridged version, interspersed with comments on the parts he cut out.

Is The Princess Bride a critique of classics like Ivanhoe and The Three Musketeers, that smother a ripping yarn under elaborate prose? A wry look at the differences between fairy tales and real life? Simply a funny, frenetic adventure? No matter how you read it, you'll put it on your "keeper" shelf. --Nona Vero

Believe it or not, my future husband used this book to win my hand. I think giving it to me as a gift was his way of proving that he is a hopeless romantic, since the book is so wonderfully hopelessly romantic. So far, he's lived up to it! If you've only seen the movie, but love it, then you should definitely read the book. Also look for the 25th Anniversary (yes, it's really been that long) edition this Christmas--it includes the first chapter of the forthcoming sequel, Buttercup's Baby.