Items related to The Four Loves 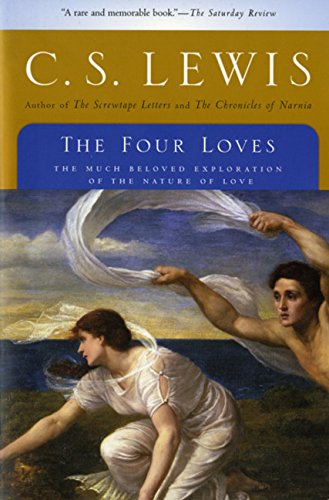 Who could conceivably begin to love God on such a prudential ground--because the security (so to speak) is better? Who could even include it among the grounds for loving? Would you choose a wife or a Friend--if it comes to that, would you choose a dog--in this spirit? One must be outside the world of love, of all loves, before one thus calculates.

His description of Christianity here is no less forceful and opinionated than in Mere Christianity or The Problem of Pain, but it is far less anxious about its reader's response--and therefore more persuasive than any of his apologetics. When he begins to describe the nature of faith, Lewis writes: "Take it as one man's reverie, almost one man's myth. If anything in it is useful to you, use it; if anything is not, never give it a second thought." --Michael Joseph Gross From the Back Cover:

"If wit and wisdom, style and scholarship are requisites to passage through the pearly gates, Mr. Lewis will be among the angels."--The New Yorker   In this candid, wise, and warmly personal book, C.S. Lewis gently reflects on the four basic kinds of human love--affection, friendship, erotic love, charity. He explores the promise and the perils of love between parents and children; love men share with other men and women with other women; love shared between men and women; and the love of and for God that deepens all love. Lewis also considers the questions of sex, possessiveness, jealousy, pride, false sentimentality, good and bad manners in loving, and the need for more laughter between lovers. There are risks that accompany the rewards of love, the author cautions, but he recommends taking them, since "the only place outside Heaven where you can be perfectly safe from all the dangers and perturbations of love is Hell."   "The Four Loves deserves to become a minor classic as a modern mirror of our souls, a mirror of the virtues and failings of human loving."--The New York Times Book Review   C.S. Lewis (1898-1963) gained international renown for an impressive array of beloved works both popular and scholarly: literary criticism, children's literature, fantasy literature, and numerous books on theology. The Four Loves is among his most celebrated achievements, as are Out of the Silent Planet, The Chronicles of Narnia, The Screwtape Letters, and Surprised by Joy.