Items related to Homage to Catalonia 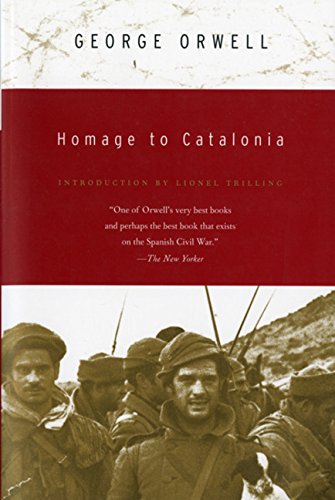 In 1936 Orwell went to Spain to report on the Civil War and instead joined the fight against the Fascists. This famous account describes the war and Orwell’s experiences. Introduction by Lionel Trilling.

"I wonder what is the appropriate first action when you come from a country at war and set foot on peaceful soil. Mine was to rush to the tobacco-kiosk and buy as many cigars and cigarettes as I could stuff into my pockets." Most war correspondents observe wars and then tell stories about the battles, the soldiers and the civilians. George Orwell--novelist, journalist, sometime socialist--actually traded his press pass for a uniform and fought against Franco's Fascists in the Spanish Civil War during 1936 and 1937. He put his politics and his formidable conscience to the toughest tests during those days in the trenches in the Catalan section of Spain. Then, after nearly getting killed, he went back to England and wrote a gripping account of his experiences, as well as a complex analysis of the political machinations that led to the defeat of the socialist Republicans and the victory of the Fascists.