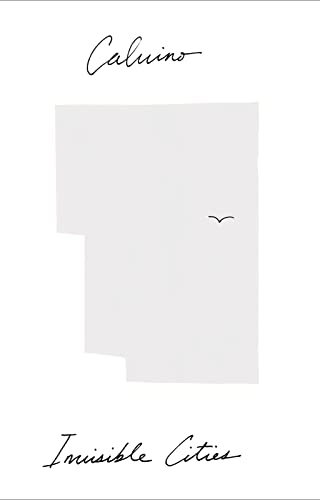 “Cities, like dreams, are made of desires and fears, even if the thread of their discourse is secret, their rules are absurd, their perspectives deceitful, and everything conceals something else.” — from Invisible Cities

“Invisible Cities changed the way we read and what is possible in the balance between poetry and prose . . . The book I would choose as pillow and plate, alone on a desert island.” — Jeanette Winterson

"Kublai Khan does not necessarily believe everything Marco Polo says when he describes the cities visited on his expeditions, but the emperor of the Tartars does continue listening to the young Venetian with greater attention and curiosity than he shows any other messenger or explorer of his." So begins Italo Calvino's compilation of fragmentary urban images. As Marco tells the khan about Armilla, which "has nothing that makes it seem a city, except the water pipes that rise vertically where the houses should be and spread out horizontally where the floors should be," the spider-web city of Octavia, and other marvelous burgs, it may be that he is creating them all out of his imagination, or perhaps he is recreating details of his native Venice over and over again, or perhaps he is simply recounting some of the myriad possible forms a city might take.

ITALO CALVINO (1923–1985) attained worldwide renown as one of the twentieth century’s greatest storytellers. Born in Cuba, he was raised in San Remo, Italy, and later lived in Turin, Paris, Rome, and elsewhere. Among his many works are Invisible Cities, If on a winter's night a traveler, The Baron in the Trees, and other novels, as well as numerous collections of fiction, folktales, criticism, and essays. His works have been translated into dozens of languages.

Book Description Paperback. Condition: New. Harvest/HBJ. Language: English. Brand new Book. In a garden sit the aged Kublai Khan and the young Marco Polo--Tartar emperor and Venetian traveler. Kublai Khan has sensed the end of his empire coming soon. Marco Polo diverts the emperor with tales of the cities he has seen in his travels around the empire: cities and memory, cities and desire, cities and designs, cities and the dead, cities and the sky, trading cities, hidden cities. Soon it becomes clear that each of these fantastic places is really the same place. Seller Inventory # ABZ9780156453806