Items related to A Passage to India

Forster, E.M. A Passage to India 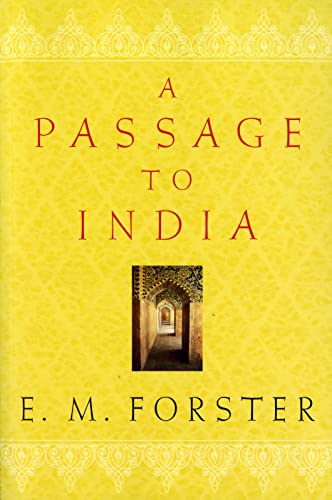 Among the greatest novels of the twentieth century and the basis for director David Lean’s Academy Award-winning film, A Passage to India tells of the clash of cultures in British India after the turn of the century. In exquisite prose, Forster reveals the menace that lurks just beneath the surface of ordinary life, as a common misunderstanding erupts into a devastating affair.

What really happened in the Marabar caves? This is the mystery at the heart of E.M. Forster's 1924 novel, A Passage to India, the puzzle that sets in motion events highlighting an even larger question: Can an Englishman and an Indian be friends?

"It is impossible here," an Indian character tells his friend, Dr. Aziz, early in the novel.

"They come out intending to be gentlemen, and are told it will not do.... Why, I remember when Turton came out first. It was in another part of the Province. You fellows will not believe me, but I have driven with Turton in his carriage--Turton! Oh yes, we were once quite intimate. He has shown me his stamp collection.

"He would expect you to steal it now. Turton! But red-nosed boy will be far worse than Turton!

"I do not think so. They all become exactly the same, not worse, not better. I give any Englishman two years, be he Turton or Burton. It is only the difference of a letter. And I give any Englishwoman six months. All are exactly alike."

Written while England was still firmly in control of India, Forster's novel follows the fortunes of three English newcomers to India--Miss Adela Quested, Mrs. Moore, and Cyril Fielding--and the Indian, Dr. Aziz, with whom they cross destinies. The idea of true friendship between the races was a radical one in Forster's time, and he makes it abundantly clear that it was not one that either side welcomed. If Aziz's friend, Hamidullah, believed it impossible, the British representatives of the Raj were equally discouraging.

"Why, the kindest thing one can do to a native is to let him die," said Mrs. Callendar.
"How if he went to heaven?" asked Mrs. Moore, with a gentle but crooked smile.
"He can go where he likes as long as he doesn't come near me. They give me the creeps."

Despite their countrymen's disapproval, Miss Quested, Mrs. Moore, and Mr. Fielding are all eager to meet Indians, and in Dr. Aziz they find a perfect companion: educated, westernized, and open-minded. Slowly, the friendships ripen, especially between Aziz and Fielding. Having created the possibility of esteem based on trust and mutual affection, Forster then subjects it to the crucible of racial hatred: during a visit to the famed Marabar caves, Miss Quested accuses Dr. Aziz of sexually assaulting her, then later recants during the frenzied trial that follows. Under such circumstances, affection proves to be a very fragile commodity indeed.

Arguably Forster's greatest novel, A Passage to India limns a troubling portrait of colonialism at its worst, and is remarkable for the complexity of its characters. Here the personal becomes the political and in the breach between Aziz and his English "friends," Forster foreshadows the eventual end of the Raj. --Alix Wilber

A Passage To India (Penguin Classics)