Items related to The Medical Department: Medical Service in the War...

The Medical Department: Medical Service in the War Against Japan (United States Army in World War II: The Technical Services) 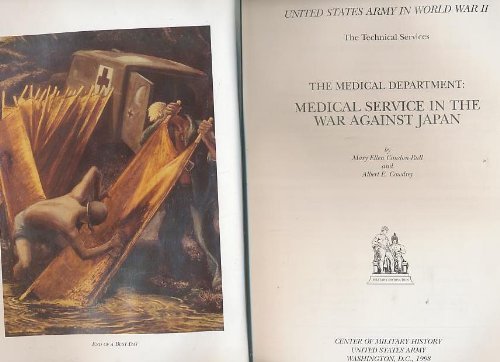 This book is a reproduction of a volume found in the collection of the University of Michigan Library. It is produced from digital images created through the Library's large-scale digitization efforts. The digital images for this book were cleaned and prepared for printing through automatic processes. Despite the cleaning process, occasional flaws may still be present that were part of the original work itself, or introduced during digitization.

Mary Ellen Condon-Rall was born in Brooklyn, New York, where she received her primary and secondary education. She earned her B.A. and M.A. degrees respectively from Molloy College for Women and Fordham University, both in the New York area, and her Ph.D. degree from the University College of the University of London in England. Beginning in 1972, she started her career as a historian with The Historical Unit of the U.S. Army Medical Department and, in 1976, when The Historical Unit was absorbed, moved to the U.S. Army Center of Military History. In 1990 Dr. Condon-Rall was awarded a one-year Secretary of the Army Research and Study Fellowship. She is the author of Disaster on Green Ramp: The Army’s Response; a monograph on host nation medical support during the Persian Gulf war; a chapter on the history of military anesthesia in the Anesthesia and Perioperative Care of the Combat Casualty volume of The Textbook of Military Medicine; and a chapter on the U.S. Army and the fight against malaria in the forthcoming work Science and the Pacific War. She also has contributed numerous articles on military medicine and naval history in American, British, and Australian journals. Albert E. Cowdrey was born in New Orleans, Louisiana, and received his education from the schools in that city and from Tulane and Johns Hopkins Universities. He served in the Army as an enlisted man during the years 1957–59. After teaching at Tulane University and at Louisiana State University, he joined the staff of the U.S. Army Corps of Engineers historical office and, since 1978, that of the U.S. Army Center of Military History, from where he retired in 1993. His interest in southern history brought him the American Historical Association’s Herbert Feis Award in 1984, and his prizewinning history of Army medicine in the Korean War, The Medics’ War, has been widely adopted as a text in military medical schools. Dr. Cowdrey is the coauthor of The Medical Department: Medical Service in the European Theater of Operations and author of Fighting for Life: American Military Medicine in World War II. He also has published many articles on a variety of historical topics in American, British, Canadian, and international journals.