Items related to Melodies and memories 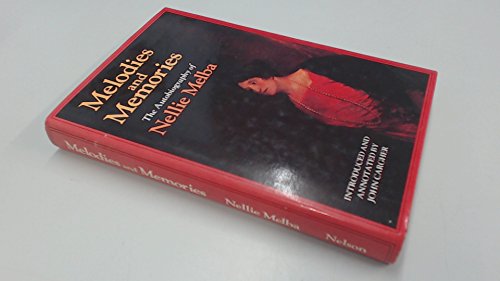 Dame Nellie Melba (1861-1931) was one of the most famous sopranos of her time. Born in Australia, Melba began her training in Melbourne but moved to Europe in 1882 to start her career. She found success in Brussels as Gilda in Verdi's Rigoletto and was soon well known throughout the continent's opera houses. She debuted at the Metropolitan Opera in New York in 1893. Her repertoire extended over twenty-five roles, and she was regarded as unmatched in ten of these, continuing to perform throughout her life, in concert recitals as well as in opera, to great acclaim, and becoming one of the earliest modern 'celebrities'. In this autobiography, published in 1925, Melba describes her childhood and her journey from the 'great Australian Bush' to the bright lights of the European and American stage, while also giving a colourful, first-hand account of the world of opera.

Dame Nellie Melba (1861-1931) was one of the most famous sopranos of her time. In this autobiography, published in 1925, Melba recounts the journey from her Australian childhood to fame and fortune in Europe, while also painting a vivid portrait of the opera world in which she triumphed.

Book Description Nelson, 1980. Condition: Good. A+ Customer service! Satisfaction Guaranteed! Book is in Used-Good condition. Pages and cover are clean and intact. Used items may not include supplementary materials such as CDs or access codes. May show signs of minor shelf wear and contain limited notes and highlighting. Seller Inventory # 0170056686-2-4

5. Melodies and Memories: The Autobiography Of Nellie Melba

Book Description Thomas Nelson 1980-01-01, 1980. Hardcover. Condition: Very Good. Item is in very good condition. If supplemental codes/CDs for textbooks are required please contact us prior to purchasing as they may be missing. Seller Inventory # DS-0170056686-2

6. Melodies and Memories: The Autobiography of Nellie Melba

7. Melodies and Memories The Autobiography of Nellie Melba

Book Description Nelson, West Melbourne, 1980. Hardcover (Original Cloth). Condition: Very Good. Dust Jacket Condition: Very Good. Photographic (illustrator). First Edition. 800 g.; pp. xvi, 254; 19 plates (12 f/p.), basic dates on Melba's life, notes, acknowledgements, index; 'Melodies and Memories' is the remarkable autobiography of Dame Nellie Melba ( Mrs Nellie Armstrong ), one of our most famous Australians of all time and who was also the most sought-after soprano the world has ever known. No other account of her life could exert the same fascination as her own, first published in a New York magazine in 1925 and republished after lying forgotten for many years. With an introduction and annotated by John Cargher. Ownership detail on the front paste down. Trace of foxing to the underside of the dust jacket. No other damage to describe. Size: 8vo - over 7ľ" - 9ľ" tall. Please refer to accompanying picture (s). Illustrator: Photographic. Quantity Available: 1. Category: Biography & Autobiography; Performing Arts; ISBN: 0170056686. ISBN/EAN: 9780170056687. Inventory No: 0236286. Seller Inventory # 0236286

10. Melodies and Memories - The Autobiography of Nellie Melba