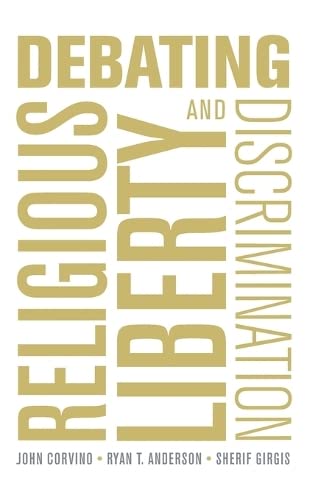 Many such questions have arisen in response to same-sex marriage: How should we treat county clerks who do not wish to authorize such marriages, for example; or bakers, florists, and photographers who do not wish to provide same-sex wedding services? But the conflicts extend well beyond the LGBT rights arena. How should we treat hospitals, schools, and adoption agencies that can't in conscience follow antidiscrimination laws, healthcare mandates, and other regulations? Should corporations ever get exemptions? Should public officials?

Should we keep controversial laws like the Religious Freedom Restoration Act, or pass new ones like the First Amendment Defense Act? Should the law give religion and conscience special protection at all, and if so, why? What counts as discrimination, and when is it unjust? What kinds of material and dignitary harms should the law try to fight-and what is dignitary harm, anyway?

Beyond the law, how should we treat religious beliefs and practices we find mistaken or even oppressive? Should we tolerate them or actively discourage them?

In point-counterpoint format, Corvino, Anderson and Girgis explore these questions and more. Although their differences run deep, they tackle them with civility, clarity, and flair. Their debate is an essential contribution to contemporary discussions about why religious liberty matters and what respecting it requires.

John Corvino, Ph.D. is Professor and Chair of the Philosophy Department at Wayne State University in Detroit, Michigan. He is the co-author (with Maggie Gallagher) of Debating Same-Sex Marriage (June 2012) and the author of What's Wrong with Homosexuality? (January 2013), both from Oxford University Press.

Ryan T. Anderson, Ph.D., is William E. Simon Senior Research Fellow at The Heritage Foundation. He is author of Truth Overruled: The Future of Marriage and Religious Freedom (Regnery, 2015), co-author of What Is Marriage? Man and Woman: A Defense (Encounter, 2012) and co-editor of A Liberalism Safe for Catholicism (University of Notre Dame Press, 2017).

Sherif Girgis, J.D., is a Ph.D. candidate in philosophy at Princeton and lead author (with Ryan T. Anderson and Robert P. George) of What Is Marriage? Man and Woman: A Defense (Encounter Books, 2012). He earned a law degree from Yale and a B.Phil. (M.Phil.) in philosophy from Oxford as a Rhodes Scholar.

"Overall, this book is a thought-provoking endeavour, and it is commendable that the authors have tried to challenge one another and to find areas of agreement. Their willingness to reach out and engage in reasoned debate is valuable in and of itself." -- Notre Dame Philosophical Reviews

"In our deeply divided nation, Debating Religious Liberty and Discrimination is a refreshing and hope-inspiring book. Provocative, clear, careful in argument, searching in coverage, it shows that people who strongly disagree can both find much common ground and also articulate their differences with respect and care, fostering a community of reason. It will be a wonderful book for undergraduate teaching, but it is also challenging for people well-versed in the subject, whether they agree or disagree." -- Martha C. Nussbaum, School of Law and Department of Philosophy, The University of Chicago

"One of the most important debates in our time is that it of religious liberty as it relates to controversies over sexuality and marriage. Sadly, usually most Americans don't have these debates at all, content to stay in our silos and never engage with those who disagree with us. This book is different. Ryan Anderson, Sherif Girgis, and John Corvino model how to hold strong (very strong) opinions while debating others with respect. This book will equip you, wherever you stand, on how the "other side" from you thinks. If American society follows the lead of this book, our culture wars won't end, but they just might be kinder and smarter. That's a good start." -- Russell Moore, President, Ethics & Religious Liberty Commission of the Southern Baptist Convention


"Debating Religious Liberty and Discrimination, is a direct challenge to our cultural moment, opting for careful analysis over clickbait, mutual understanding over demonization, and clearly demarcated disagreement over sweeping dismissal. The authors take the time to lay out their best arguments, then respond to the best arguments of their opponents. Whether or not the book ultimately causes readers to change their views is not the measure of its success. The authors provide a desperately needed model for engagement: they argue with, not at their opponent; they argue together...For a nation that seems more divided than ever, that's a great place to start." --Commonweal Magazine
"...the U.S. remains a large country with citizens of many religions, diametrically opposed opinions, and lifestyles that will inevitably clash. Given that conflict is unavoidable, the authors agree that we ought to foster a culture in which we can seek common ground and conduct debate on the plane of ideas and policy, rather than descend into endless painful lawsuits or bitter social-media feuds with our ideological opponents. Corvino, Anderson, and Girgis illustrate in this compelling book that such a judicious debate can take place and can generate fruitful conversation, as well as delineate areas of authentic agreement and practical compromise. And, perhaps even better than that, they give us the tools we can use to find those agreements and compromises ourselves."--National Review
"Debating Religious Liberty and Discrimination...raises the plausibility of living with greater diversity of thought on fundamental issues in civil society. Learning to tolerate religious disagreement has been a signal achievement of liberal societies, and if we can live together with mutually exclusive--but also reciprocally respectful--religious systems thriving in civil society, why can't we expand the scope of that tolerance to include other moral and social issues that divide us?" --LA Review of Books
"... all three authors deserve praise for tackling this subject in this way. They disagree civilly and engage with one another substantively and thoughtfully. In an age when discussions of religious liberty often devolve into cheap political point-scoring, the fact that elevated debate occurred with both charity and clarity is perhaps the ultimate value of this book. May it be a model to disputants on this and other heated subjects, for years to come." --The Weekly Standard

"Though the authors test the boundaries, they remain within the assumptions of American constitutional discourse and achieve a well-organized, clear, and civil exploration of the issues." - Sotirios A. Barber University of Notre Dame