Items related to Athenaze, Book I: An Introduction to Ancient Greek 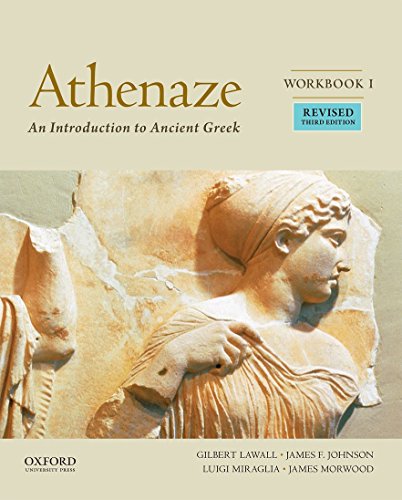 Combining the best features of traditional and modern methods, Athenaze: An Introduction to Ancient Greek 3/e, provides a unique, bestselling course of instruction that allows students to read connected Greek narrative right from the begining and guides them to the point where they can begin reading complete classical texts. Carefully designed to hold students' interest, the course begins in Book I with a fictional narrative about an Attic farmer's family placed in a precise historical context (423-431 B.C.). This narrative, interwoven with tales from mythology and the Persian Wars, gradually gives way in Book II to adapted passages from Thucydides, Plato, and Herodotuc and ultimately to excerpts of the original Greek of Bacchylides, Thucudides, and Aristophanes' Acharnians. Essays on relevant aspects of ancient Greek culture and history are also woven throughout.

James Morwood was elected to a Fellowship at Wadham College in 1966, where he taught and served as Dean of Degrees, Steward of Common Room, and Dean (the last post from 2000 to 2006). He became an Emeritus Fellow in 2006 and remains Editor of the Wadham Gazette. He still does some teaching at the college.
James was educated at Peterhouse, Cambridge, where he sat Part I of the Classical Tripos and Part II of the English Tripos. After a year at Merton College, Oxford on the course for the Diploma of Education, he went to Harrow School in September 1966 to teach Classics and English. He spent 30 years at Harrow, the last seventeen of them as Head of Classics. He was deeply involved in school journalism and drama, working with Richard Curtis and Ben Cumberbatch among many others. He was librarian for more than eleven years, and sat on and later chaired the school's Treasures Committee, a body which brought into existence the Old Speech Room Gallery.

In 1996 he moved to Oxford University and took up the post of Grocyn Lecturer in the Classics Faculty and served for a year as President of the Oxford Philological Society.

James has been a committed member of the Joint Association of Classical teachers and held the Presidency of the Association for 1999-2001, becoming an Honorary Member in 2011. He was President of the London Association of Classical Teachers for 1995-6; has been a regular tutor at the JACT Greek Summer School at Cheltenham and Bryanston since 1970, serving as its Director of Studies, and its Director. He also teaches Classics and English literature at the University of Cambridge Institute of Continuing Education.

With Eric Dugdale, he is currently editing a new series entitiled 'Greece and Rome: Texts and Contexts'. His revision of the Oxford Latin Course for North American college students was published in January 2012; his book on Hadrian (Bloomsbury) was published in the summer 2013.

Current projects include an edition of Virgil, Aeneid 3 (with Stephen Heyworth), an edition (with Chris Collard) of Euripedes' Iphegenia at Aulis and A Little Greek Reader (with Stephen Anderson-Oxford University Press). He lectures on cruises in the Adriatic and Agean, last September sailing from Istanbul to Athens.

"Athenaze, Books I and II, presents a thoughtful, reading-based approach to learning ancient Greek. Both books are interspersed with superbly written cultural and historical essays that introduce readers to the signature characteristics of Greek culture."--Stephen Esposito, Boston University

"Athenaze is an excellent adaptation of the reading approach for ancient Greek, with excellent Greek readings."--Nicholas Rynearson, University of Georgia

"The approach is student friendly, the readings are varied and interesting, and the grammatical explanations are clear."--Laurie Cosgriff, Portland State University

"The storyline and characters of the text readily draw students into the language and culture of the Greeks. Athenaze is arguably the best first-year Greek text on the market."--Richard L. Phillips, Virginia Tech University

Athenaze, Workbook I: An Introduction to Ancient Greek

Athenaze I : An Introduction to Ancient Greek

Shipping: US$ 18.14
From United Kingdom to U.S.A.
Destination, rates & speeds

Athenaze, Workbook I: An Introduction to Ancient Greek

Shipping: US$ 12.04
From United Kingdom to U.S.A.
Destination, rates & speeds

Shipping: US$ 12.10
From United Kingdom to U.S.A.
Destination, rates & speeds

Athenaze, Workbook I: An Introduction to Ancient Greek Format: Paperback

Athenaze, Book I: An Introduction to Ancient Greek Paperback