Items related to The Oxford Dictionary of Philosophy

The Oxford Dictionary of Philosophy 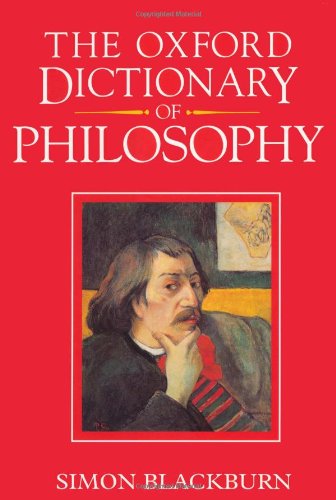 The Gambler's Fallacy, the Dirty Hands Argument, Pascal's Wager, Buridan's Ass, Wittgenstein's Beetle in the Box--philosophical terms can be both intriguing and baffling. Now, eminent philosopher Simon Blackburn offers the most authoritative and up-to-date dictionary of philosophy available in a single volume, packed with helpful information for the novice and with astute observations for the expert. Ranging from Aristotle to Zen, the two thousand plus entries cover the entire span of philosophy, from the Vedas (written over three thousand years ago) to the most recent technical terminology, with ample coverage of important themes from Chinese, Indian, Islamic, and Jewish philosophy.
Here are all the terms one would expect to find in a comprehensive dictionary of philosophy--idealism and empiricism, ethics and aesthetics, Epicureanism and Stoicism, deism and pantheism, liberalism and conservatism, existentialism and logical positivism, and much more. Blackburn also defines many terms and concepts not normally found in such reference works, including entries for apathy, Elis (the Greek city which passed a law exempting all philosophers from taxation), laughter, and the meaning of life, and he includes relevant terms from disciplines such as mathematics, physics, biology, artificial intelligence, and linguistics. In addition, there are capsule biographies of nearly five hundred individuals, from the pre-Socratics, to such major figures as Aquinas, Descartes, Spinoza, Locke, Hobbes, Hegel, Kant, Schopenhauer, and Nietzsche, to such contemporary figures as Jacques Derrida, Michel Foucault, Richard Rorty, Simone de Beauvoir, and Luce Irigaray. Many more women appear here than in other philosophical dictionaries, ranging from Lady Anne Finch Conway, a 17th-century Quaker philosopher and an influence on Leibniz, to Hypatia, an important 4th-century Neoplatonist and mathematician of Alexandria, who was tortured and murdered by Christian Monks at the behest of the patriarch Cyril. And Blackburn also includes figures such as Einstein, Darwin, and Aesop. Finally, Blackburn interjects much of his own personality and wit into these entries. For instance, writing on Francis Bacon, he observes that Bacon's "legal philosophy was one of absolute duty to the sovereign, which cannot have hindered his rise to the position of Lord Chancellor." And he begins his entry on apathy with "Although it is the particular enemy of teachers and sports coaches, apathy often gets a good philosophical press, especially in ethical systems that regard desire and worldly interest as low and unworthy."
A survey of philosophy through the eyes of one of its leading practitioners, The Oxford Dictionary of Philosophy is both a handy reference and an intriguing book in which to browse. It is an essential volume for anyone interested in philosophy.

Simon Blackburn is Edna J. Koury Distinguished Professor of Philosophy at the University of North Carolina. He was a fellow and tutor at Pembroke College, Oxford University, from 1969 to 1990. He is the author of Spreading the Word and Essays in Quasi-Realism, and from 1984 to 1990, he was editor of the journal Mind.

Blackburn designed The Oxford Dictionary of Philosophy "as a playground for browsers and a resource for anyone interested in general intellectual movements, as well as a simple work of reference." He was editor of the journal Mind from 1984 through 1990 and is currently a distinguished professor of philosophy at the University of North Carolina. He is author of Essays in Quasi-Realism (1993) and Spreading the Word: Groundings in the Philosophy of Language (1984). Blackburn operates in the Anglo-American analytic philosophical tradition, as opposed to the existentialist or phenomenological traditions of Europe.

The work is a distinctly personal one, though Blackburn's assessments of philosophical positions and discussions are objective and expository in tone. For example, of Immanuel Kant, he states, "his place as the greatest philosopher of the last 300 years is well assured.. . . [w]hilst his confidence in the a priori and the structure of his idealism have been widely rejected, it is not too much to say that all modern epistemology, metaphysics, and even ethics, is implicitly affected by the architecture he created."

The nearly 3,000 entries cover a wide variety of topics. Biographical entries include Aquinas, Russell, Isaiah Berlin, Michel Foucault, Darwin, and Keynes. While philosophers such as Plato and Nietzsche receive a page or more of treatment, those included for a peripheral contribution to philosophy, such as Keynes or Einstein, receive about half a column. Other entries run from a few lines to a page in length. Topics range back to the beginnings of Western and Eastern philosophy and across fields to discuss philosophical insights or approaches to economics, love, dreams, biology, and so forth. Yet the bulk of the dictionary consists of concise, focused definitions of terms used by analytic philosophers and philosophy students: falsifiability, protocol statements, liar paradox, subjectivism/objectivism, and prisoners' dilemma. Blackburn writes in an interesting and easy-to-follow style. He has made liberal use of cross-references (marked by asterisks within the text) and see and see also references at the end of entries. Some entries include bits of symbolic logic; a two-page appendix defines most of the symbols used.

1. The Oxford Dictionary of Philosophy

2. The Oxford Dictionary of Philosophy

3. The Oxford Dictionary of Philosophy

4. The Oxford Dictionary of Philosophy

5. The Oxford Dictionary of Philosophy

6. The Oxford Dictionary of Philosophy

9. The Oxford Dictionary of Philosophy