Items related to Dinosaur Cove: Haunting of the Ghost Runners 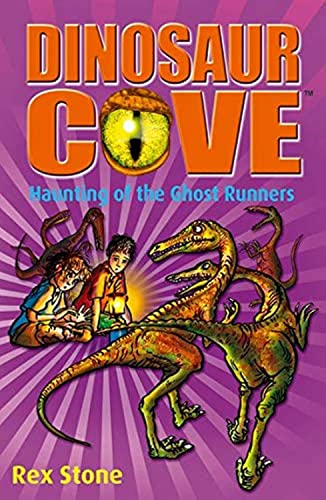 Other titles in the series: Attack of the Lizard King Charge of the Three-horned Monster March of the Armoured Beasts Flight of the Winged Serpent Catching the Speedy Thief Stampede of the Giant Reptiles Rescuing the Plated Lizard Swimming with the Sea Monster Tracking the Gigantic Beast Escape from the Fierce Predator Finding the Deceptive Dinosaur Assault of the Friendly Fiends Chasing the Tunnelling Trickster Clash of the Monster Crocs Rampage of the Hungry Giants Journey to the Ice Age-a double-length adventure The Big Adventure-the first three stories in a roaring gift edition Biographical information: Rex Stone is the pseudonym used by Working Partners, the creators of Rainbow Magic and other successful series like Animal Ark. Illustrator Mike Spoor grew up in Northumberland and it was during holidays to the Lake District with his grandparents that he first found a love for drawing. After attending art college and working as a landscape architect Mike trained as a teacher. He moved to Australia and spent his time flying all over the country to run ceramics workshops. Now, after swapping ceramics for illustration, Mike is back in England and has illustrated many hundreds of books.