Items related to A History of Roman Britain

A History of Roman Britain 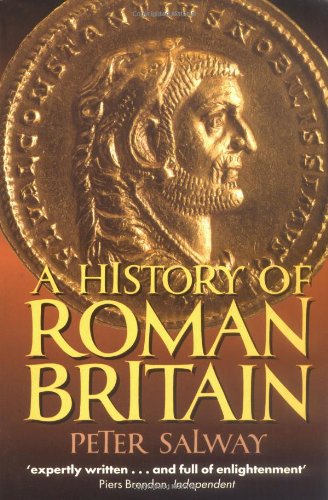 In A History of Roman Britain, noted classical historian Peter Salway provides a rich account of Britain's centuries under Roman rule. Britain, Salway writes, was a place of fascination for the Romans--a fascination he brings to life with beautiful maps and illustrations and a thorough, authoritative narrative.
Salway introduces us to what is known of the pre-Roman Britons, and deftly describes Julius Caesar's dramatic expeditions in 55 and 54 B.C; in the years that followed, new contacts grew between the Romans and the inhabitants of this strange island. Salway's comprehensive narrative blends together the changing politics and ways of life of the native Britons, the climactic conquest under Claudius and the subsequent, often violent consolidation, and the place of the new province in Imperial affairs. He carefully integrates the story of Roman Britain into the story of the Empire itself, showing the close attention the emperors paid to British affairs, and the interventions in imperial politics by the legions stationed there. Salway draws on the latest archeological finds, thoughtfully assessing the evidence and weaving it into his seamless narrative.
Highly authoritative and readable, A History of Roman Britain brings alive the classical past of a familiar part of today's world.

About the Author:
Peter Salway, formerly a Fellow of Sidney Sussex College, Cambridge, and subsequently of All Souls College, Oxford, is an Emeritus Professor of the Open University and Chairman of the Oxford Archaeological Unit.

"One could not ask for a nore meticulous or scholarly assessment of what Britain meant to the Romans, or Rome to Britons, than Peter Salway's monumental study."--Sunday Times

"Superbly readable...splendid witness to the vivacity and accessibility of the latest work on this exciting period."--Sunday Telegraph
"There will be new discoveries; but this is a book that will surely stand the test of time."--Times Literary Supplement

1. A History of Roman Britain

2. A History of Roman Britain