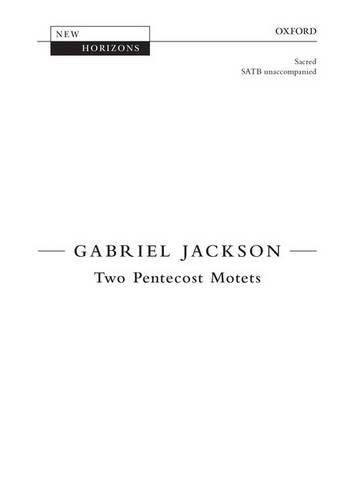 for SATB unaccompanied This work presents two contrasting yet coherent motets: The joyful 'Confirma hoc Deus', with its jubilant, melismatic motif; and the solemn 'Factus est', which features aleatoric sequences set against metred music to emphasise a reflective manner of worship.

Gabriel Jackson was born in Bermuda. After three years as a chorister at Canterbury Cathedral he studied composition at the Royal College of Music. Jackson's music has been commissioned, performed and broadcast worldwide, and his works have been presented at many festivals including Aldeburgh, Cheltenham, Spitalfields, and the BBC Proms. His liturgical pieces are in the repertoires of many of Britain's cathedral and collegiate choirs, and his choral works in general have been recorded by some of the world's leading choirs including Polyphony, The Vasari Singers, The State Choir of Latvia, and Merton College Choir, Oxford. He is currently the Associate Composer to the BBC Singers, who have premiered and broadcast a number of recent commissions. Over recent years Jackson's music has been equally focussed on instrumental works. Commissions include works for organist Michael Bonaventure, Red Note Ensemble, and the Lunar Sax Quartet.