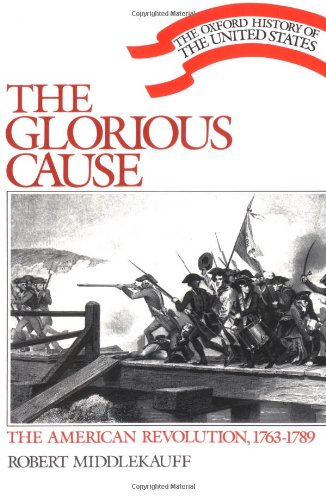 This outstanding narrative history, the first volume to appear in the Oxford History of the United States, offers an intimate view of the development of the Revolutionary War, the battle between the colonies and the motherland, and the establishment of the American republic. Beginning with the Treaty of Paris in 1763 and continuing to the election of George Washington as the first president, Robert Middlekauff charts the growing conflict between England and America and portrays the drama and anguish of the colonies' struggle for independence.

Many histories of the American Revolution are written as if on stained glass, with George Washington's forces of good battling King George III's redcoat devils. The actual events were, of course, far more complex than that, and Robert Middlekauff undertakes the difficult task of separating the real from the mythic with great success. From him we learn that England taxed the colonials so heavily in an attempt to retire the massive debt incurred in defending those very colonials against other powers, notably France; that the writing of the Constitution was delayed for two years while states argued among themselves in the face of massive military losses; and that demographic shifts during the Revolution did much to increase America's ethic diversity at an early and decisive time. Vividly told, this is a superb account of the nation's founding.

Robert Middlekauff is at University of California, Berkeley.

2. The Glorious Cause: The American Revolution, 1763-1789 (Oxford History of the United States)

3. The Glorious Cause: The American Revolution, 1763-1789 (Oxford History of the United States)

4. The Glorious Cause: The American Revolution, 1763-1789 Middlekauff, Robert