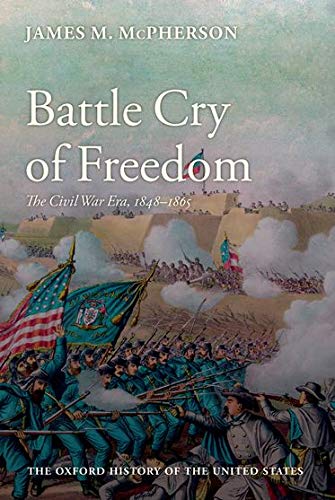 Filled with fresh interpretations and information, puncturing old myths and challenging new ones, Battle Cry of Freedom will unquestionably become the standard one-volume history of the Civil War.

James McPherson's fast-paced narrative fully integrates the political, social, and military events that crowded the two decades from the outbreak of one war in Mexico to the ending of another at Appomattox. Packed with drama and analytical insight, the book vividly recounts the momentous episodes that preceded the Civil War--the Dred Scott decision, the Lincoln-Douglas debates, John Brown's raid on Harper's Ferry--and then moves into a masterful chronicle of the war itself--the battles, the strategic maneuvering on both sides, the politics, and the personalities. Particularly notable are McPherson's new views on such matters as the slavery expansion issue in the 1850s, the origins of the Republican Party, the causes of secession, internal dissent and anti-war opposition in the North and the South, and the reasons for the Union's victory.

The book's title refers to the sentiments that informed both the Northern and Southern views of the conflict: the South seceded in the name of that freedom of self-determination and self-government for which their fathers had fought in 1776, while the North stood fast in defense of the Union founded by those fathers as the bulwark of American liberty. Eventually, the North had to grapple with the underlying cause of the war--slavery--and adopt a policy of emancipation as a second war aim. This "new birth of freedom," as Lincoln called it, constitutes the proudest legacy of America's bloodiest conflict.

This authoritative volume makes sense of that vast and confusing "second American Revolution" we call the Civil War, a war that transformed a nation and expanded our heritage of liberty.

Published in 1988 to universal acclaim, this single-volume treatment of the Civil War quickly became recognized as the new standard in its field. James M. McPherson, who won the Pulitzer Prize for this book, impressively combines a brisk writing style with an admirable thoroughness. He covers the military aspects of the war in all of the necessary detail, and also provides a helpful framework describing the complex economic, political, and social forces behind the conflict. Perhaps more than any other book, this one belongs on the bookshelf of every Civil War buff.

BATTLE CRY OF FREEDOM by James M. McPherson is the best single volume history of the American Civil War. McPherson first describes the economic, social, political, and technological changes that occurred in the United States in the years before the conflict. Then, he carefully and lucidly describes the political environment in America that leads to the election of Abraham Lincoln. This election precipitated the seccession of 7 and ultimately 11 southern states. The seccession debate within the southern governments is explained fully. The war itself is described primarily in strategic terms, but with clear descriptions of the human costs of the conflict.
Anyone who wishes to understand this period of American history must read BATTLE CRY OF FREEDOM.

Book Description Hardcover. Condition: New. Dust Jacket Condition: New. This specific hardback book is in new condition with a hard board cover that has sharp edges and corners and has a tight binding. The pages are clean, crisp, unmarked and uncreased. The dust jacket is in new condition with no discernible wear. We package all books in custom cardboard book boxes for shipment and ship daily with tracking numbers ; "This authoritative volume makes sense of that vast and confusing "second American Revolution" we call the Civil War, a war that transformed a nation and expanded our heritage of liberty."; The Oxford History of the United States Series; 9.5 X 6.6 X 2.0 inches; 944 pages. Seller Inventory # 22563