Items related to Promises to Keep: African-Americans and the Constitutional...

Donald G. Nieman; Carlo Jordan Promises to Keep: African-Americans and the Constitutional Order, 1776 to the Present (Bicentennial Essays on the Bill of Rights)

Promises to Keep: African-Americans and the Constitutional Order, 1776 to the Present (Bicentennial Essays on the Bill of Rights) 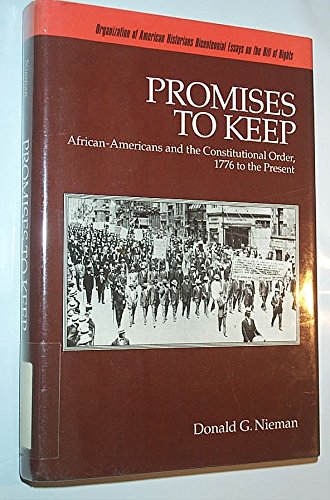 African-Americans have had an ambivalent relationship with the Constitution for more than two hundred years. Throughout most of American history, racist interpretations of the Constitution have sanctioned a legal system supportive of slavery, marked blacks as inferiors, rendered them politically powerless, and denied them justice and access to society's resources. Yet both black and white opponents of slavery and racial subordination--from antebellum abolitionists to twentieth-century civil rights leaders--have found principles in the Constitution that support their demands for freedom, citizenship, and equality.
In Promises to Keep, Donald G. Nieman tells the story of this paradoxical relationship, tracing it from the birth of the Republic to current battles over school segregation, voting rights, and affirmative action. While Nieman examines the devastating effects of constitutionally sanctioned racism on the lives of African-Americans, he also shows how blacks and their white allies have been active agents of constitutional change since the early nineteenth century, forging an egalitarian constitutionalism and using it to press a reluctant nation to honor its long-deferred promise of equality. Compact, lively, and readable, Promises to Keep illuminates the past and offers a fresh perspective on the current debate over civil rights, showing how it too often ignores the tragic history of law and race in America.
This is the first volume of Bicentennial Essays on the Bill of Rights, an important series co-sponsored by the Organization of American Historians and Oxford University Press, under the general editorship of Kermit L. Hall.

"...will force students and scholars alike to reflect on the paradoxical relationship of racism to law."--Focus on Law Studies

1. Promises to Keep: African-Americans and the Constitutional Order, 1776 to the Present (Bicentennial Essays on the Bill of Rights) Donald G. Nieman and Carlo Jordan