Items related to A Sand County Almanac: And Sketches Here and There...

A Sand County Almanac: And Sketches Here and There (Outdoor Essays & Reflections) 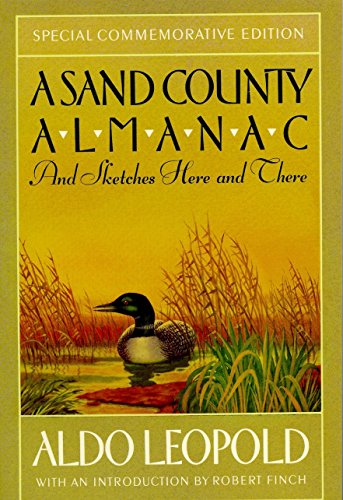 This special edition of the highly acclaimed A Sand County Almanac commemorates the one-hundredth anniversary of the birth of Aldo Leopold, one of the foremost conservationists of our century. First published in 1949 and praised in The New York Times Book Review as "full of beauty and vigor and bite," A Sand County Almanac combines some of the finest nature writing since Thoreau with an outspoken and highly ethical regard for America's relationship to the land.

The volume includes a section on the monthly changes of the Wisconsin countryside; another section that gathers together the informal pieces written by Leopold over a forty-year period as he traveled around the woodlands of Wisconsin, Iowa, Arizona, Sonora, Oregon, Manitoba, and elsewhere; and a final section in which Leopold addresses more formally the philosophical issues involved in wildlife conservation. As the forerunner of such important books as Annie Dillard's Pilgrim at Tinker Creek, Edward Abbey's Desert Solitaire, and Robert Finch's The Primal Place, this classic work remains as relevant today as it was forty years ago.

Published in 1949, shortly after the author's death, A Sand County Almanac is a classic of nature writing, widely cited as one of the most influential nature books ever published. Writing from the vantage of his summer shack along the banks of the Wisconsin River, Leopold mixes essay, polemic, and memoir in his book's pages. In one famous episode, he writes of killing a female wolf early in his career as a forest ranger, coming upon his victim just as she was dying, "in time to watch a fierce green fire dying in her eyes.... I was young then, and full of trigger-itch; I thought that because fewer wolves meant more deer, no wolves would mean hunters' paradise. But after seeing the green fire die, I sensed that neither the wolf nor the mountain agreed with such a view." Leopold's road-to-Damascus change of view would find its fruit some years later in his so-called land ethic, in which he held that nothing that disturbs the balance of nature is right. Much of Almanac elaborates on this basic premise, as well as on Leopold's view that it is something of a human duty to preserve as much wild land as possible, as a kind of bank for the biological future of all species. Beautifully written, quiet, and elegant, Leopold's book deserves continued study and discussion today. --Gregory McNamee

A profoundly affecting work. I first read this in a college ecology class and its a book I return to again and again for mental and spiritual grounding. Simple, beautiful, important and imperative.
Teri Henry, Director of Subsidiary Rights

1. A Sand County Almanac: And Sketches Here and There (Outdoor Essays & Reflections)

2. A Sand County Almanac: And Sketches Here and There (Outdoor Essays & Reflections)

3. A Sand County Almanac: And Sketches Here and There (Outdoor Essays & Reflections)

4. A Sand County Almanac: And Sketches Here and There (Outdoor Essays & Reflections)

5. A SAND COUNTY ALMANAC: AND SKETC

7. A SAND COUNTY ALMANAC: AND SKETC