Items related to The Landscape of History: How Historians Map the Past

Gaddis, John Lewis The Landscape of History: How Historians Map the Past

The Landscape of History: How Historians Map the Past 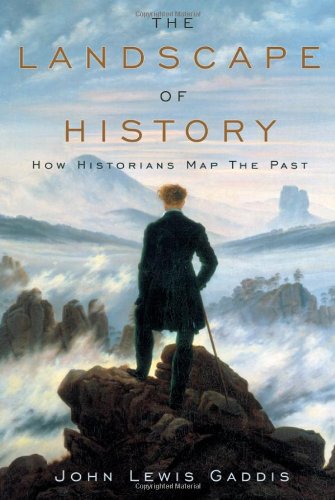 What is history and why should we study it? Is there such a thing as historical truth? Is history a science? One of the most accomplished historians at work today, John Lewis Gaddis, answers these and other questions in this short, witty, and humane book. The Landscape of History provides a searching look at the historian's craft, as well as a strong argument for why a historical consciousness should matter to us today.
Gaddis points out that while the historical method is more sophisticated than most historians realize, it doesn't require unintelligible prose to explain. Like cartographers mapping landscapes, historians represent what they can never replicate. In doing so, they combine the techniques of artists, geologists, paleontologists, and evolutionary biologists. Their approaches parallel, in intriguing ways, the new sciences of chaos, complexity, and criticality. They don't much resemble what happens in the social sciences, where the pursuit of independent variables functioning with static systems seems increasingly divorced from the world as we know it. So who's really being scientific and who isn't? This question too is one Gaddis explores, in ways that are certain to spark interdisciplinary controversy.
Written in the tradition of Marc Bloch and E.H. Carr, The Landscape of History is at once an engaging introduction to the historical method for beginners, a powerful reaffirmation of it for practitioners, a startling challenge to social scientists, and an effective skewering of post-modernist claims that we can't know anything at all about the past. It will be essential reading for anyone who reads, writes, teaches, or cares about history.

John Lewis Gaddis is the Robert A. Lovett Professor of Military and Naval History at Yale University. A leading authority on Cold War history, his books include We Now Know, The Long Peace, and Strategies of Containment.

"A masterful statement on the historical method by a distinguished Cold War historian.... Gaddis' most provocative claim is a powerful irony: Social science, with its independent variables and deductive theories, would appear to have more scientific pretensions than does history. But the historical method, which relies on thought experiments and the interplay of inductive and deductive reasoning, more fully shares the methodical logic of such fields as astronomy, paleontology, and evolutionary biology. Gaddis' characterization of the social sciences will surely spark debate even as it illuminates important intellectual connections between the disciplines. Delightfully readable, the book is a grand celebration of the pursuit of knowledge."--Foreign Affairs

"A bold and challenging book, unafraid of inviting controversy. It provides a strong statement for our time of both the limits and the value of the historical enterprise."--Alan Brinkley, New York Times Book Review
"Never before have I come across a book that so illuminated the craft of the historian.... Gaddis has a delightful command of language--and a delight in it. He draws on Gertrude Stein, Mark Twain, contemporary movies, Thucydides, Tom Stoppard, Woody Allen and lots more.... He is a distinguished scholar who writes with a clarity and a lack of pedantry that is quite marvelous. Equally impressive, he's not afraid of a rip-roaring fight with his fellow academics."--Michael Pakenham, The Baltimore Sun
"An urbane and eloquent little volume.... Gaddis's learned and graceful reflections on all of these questions are deeply humane, propelled by the conviction that only by sustaining a historical consciousness can we know where we should want to go. They will also never allow either the reader of history or the writer of it to think about the past in quite the same way as before."--Richard Bernstein, New York Times
"Rewarding and readable, with unusual thinking and delightful comparisons that range from art to music to contemporary films such as 'Shakespeare in Love' and 'Being John Malkovich....' Thought-provoking and even funny, challenging but also accessible to amateurs who read history but are ready to think more seriously about its methodology."--Associated Press (in The Chicago Tribune)
"This is another of those books that rewards the effort it requires. Besides providing invaluable insights into how the historian goes about his business, it teaches--like all really good books--of life beyond its boundaries."--Colin Walters, Washington Times
"Entertaining, masterful disquisition on the aims, limitations, design, and methods of historiography.... Employing a wide range of metaphors (from Cleopatra's nose to Napoleon's underwear), displaying an extensive knowledge of current thinking in mathematics, physics, and evolutionary biology, alluding frequently to figures as disparate as Lee Harvey Oswald, Gwyneth Paltrow, John Lennon, and John Malkovich, Gaddis guides us on a genial trip into the historical method and the imagination that informs it.... Provocative, polymathic, and pleasurable."--Kirkus Reviews
"The Landscape of History explores recent, surprising convergences of natural science and human history and does so with clarity, charm and easy erudition. Gaddis's book is a real tour de force: a delight to read, and a light-hearted celebration of the odd, 'fractal' patterns that intellectual and other forms of human and natural history exhibit."--William H. McNeill
"In this landmark study Gaddis brilliantly distills many of his previous analyses of the relationship of historical thinking to the social sciences and the hard sciences as well."--Alexander George, Professor Emeritus, Stanford University

1. The Landscape of History: How Historians Map the Past

2. The Landscape of History: How Historians Map the Past

3. The Landscape of History: How Historians Map the Past Gaddis, John Lewis

4. The Landscape of History: How Historians Map the Past

5. The Landscape of History: How Historians Map the Past

6. The Landscape of History: How Historians Map the Past