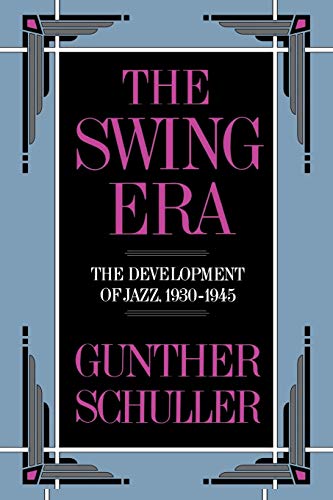 Here is the book jazz lovers have eagerly awaited, the second volume of Gunther Schuller's monumental The History of Jazz. When the first volume, Early Jazz, appeared two decades ago, it immediately established itself as one of the seminal works on American music. Nat Hentoff called it "a remarkable breakthrough in musical analysis of jazz," and Frank Conroy, in The New York Times Book Review, praised it as "definitive.... A remarkable book by any standard...unparalleled in the literature of jazz." It has been universally recognized as the basic musical analysis of jazz from its beginnings until 1933.
The Swing Era focuses on that extraordinary period in American musical history--1933 to 1945--when jazz was synonymous with America's popular music, its social dances and musical entertainment. The book's thorough scholarship, critical perceptions, and great love and respect for jazz puts this well-remembered era of American music into new and revealing perspective. It examines how the arrangements of Fletcher Henderson and Eddie Sauter--whom Schuller equates with Richard Strauss as "a master of harmonic modulation"--contributed to Benny Goodman's finest work...how Duke Ellington used the highly individualistic trombone trio of Joe "Tricky Sam" Nanton, Juan Tizol, and Lawrence Brown to enrich his elegant compositions...how Billie Holiday developed her horn-like instrumental approach to singing...and how the seminal compositions and arrangements of the long-forgotten John Nesbitt helped shape Swing Era styles through their influence on Gene Gifford and the famous Casa Loma Orchestra. Schuller also provides serious reappraisals of such often neglected jazz figures as Cab Calloway, Henry "Red" Allen, Horace Henderson, Pee Wee Russell, and Joe Mooney.
Much of the book's focus is on the famous swing bands of the time, which were the essence of the Swing Era. There are the great black bands--Duke Ellington, Count Basie, Jimmie Lunceford, Earl Hines, Andy Kirk, and the often superb but little known "territory bands"--and popular white bands like Benny Goodman, Tommy Dorsie, Artie Shaw, and Woody Herman, plus the first serious critical assessment of that most famous of Swing Era bandleaders, Glenn Miller. There are incisive portraits of the great musical soloists--such as Art Tatum, Teddy Wilson, Coleman Hawkins, Lester Young, Bunny Berigan, and Jack Teagarden--and such singers as Billie Holiday, Frank Sinatra, Peggy Lee, and Helen Forest.

Gunther Schuller began his professional career in 1943, at age seventeen, when he played French horn with the Cincinnati Symphony and later served as first horn in the Metropolitan Opera. A prominent American composer, he has written a wide range of orchestral and chamber music, as well as jazz compositions.

Twenty years after the publication of Early Jazz , French hornist, conductor, composer, educator and broadcaster Schuller brings forth this 900-page second volume in his monumental "History of Jazz." He is perhaps better equipped to analyze style and technique than anyone else who has written about this music. No previous critic has delineated in as great detail how the various styles developed and coalesced. Schuller devotes 40 pages to Louis Armstrong, 110 pages and 62 musical examples to Duke Ellington. He identifies the unique characteristics of each of the big bandsamong them, Count Basie, Benny Carter, Lionel Hampton, Coleman Hawkins, Fletcher and Horace Henderson, Earl Hines, Jimmie Lunceford and Chick Webb; of arrangers Mel Powell, Don Redman and Eddie Sauter; of such soloists as Bunny Berigan, Charlie Christian, Roy Eldridge, Billie Holiday, Art Tatum, Jack Teagarden, Ben Webster and Teddy Wilson; of the small groups of Nate Cole, John Kirby, Red Nichols and Rex Stewart; even of the "territory bands" of the Middle West. He also explicates the contributions of the big white bands of Charlie Barnet, Bob Crosby, Tommy Dorsey, Benny Goodman, Woody Herman, Harry James, Gene Krupa, Glenn Miller and Claude Thornhill, who, by codifying and expanding upon the innovations of their black counterparts, played as crucial a role and brought jazz to millions who otherwise would never have heard any jazz at all. Schuller's evaluations are original, trenchant and even-handed: He discusses shortcomingsstylistic stultification, topheavy sound, exuberant vulgarity, for exampleas well as achievements. And he demonstrates the gradual atrophying of swing by repetition, formularization, the reduction of improvisation and loss of spontaneity. More brilliantly than anyone before him, Schuller has explained a glorious period in the history of American music. Illustrated.
Copyright 1988 Reed Business Information, Inc.