Items related to Isabel the Queen: Life and Times

Isabel the Queen: Life and Times 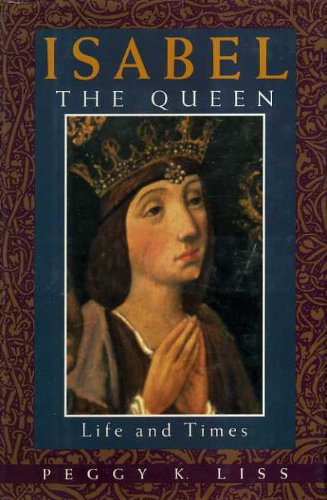 Isabel of Castile was one of the most influential monarchs ever known, the central figure in some of the most potent and far-reaching events in world history. She supported the Spanish Inquisition (which tortured and punished or had executed thousands of baptized Christians accused of practicing Judaism). She waged a successful war against Muslim Granada. And bent upon overseas expansion (she was after all the grand-niece of Prince Henry the Navigator), Isabel sponsored Christopher Columbus. Yet questions remain as to her actual role in these and other events. Why did she introduce the Inquisition? Why did she expel the Jews from Spain and the Muslims from Castile? Was it bigotry or piety or something else? And how aware was she of the injustices committed against New World peoples? For such a notable and controversial figure, much about Isabel has remained a mystery.
Now, in Isabel the Queen, Peggy K. Liss proposes answers and provides both a sweeping biography of a Queen who had a profound impact on history, and a vivid portrait of a vanished, turbulent world. We see young Isabel as a poor relation at the corrupt court of her half-brother, Enrique IV (known as The Impotent), where she became a pawn in a civil war between the king and the great nobles. We learn how Isabel survived plots to disinherit her, how she won her way to succession, and why she secretly married Fernando, Prince of Aragon. And we witness the unprecedented ceremony in which Isabel assumed the crown alone, without Fernando, thereby paving the way for her daughter and other women to rule in their own right. Peggy Liss works through the fact and fiction, legend and opinion that have swirled around Isabel to reveal for the first time how her goals for Spain, her piety, and swelling power culminated in the remarkable year of 1492. (A variety of sources--documents, chronicles, literature, art, and architecture--reveal Isabel's attitudes towards religion, politics, and royal policy.) And finally, she shows us the older Isabel, who, having won the respect of Europe, suffered a series of family tragedies ruining her plans and her health and bringing her unprecedented reign to an end in 1504 with her death at the age of fifty-three.
Based on years of research, travel, and reflection, Isabel the Queen brings to life the people, places, and events that surrounded one of history's most dynamic monarchs. In these pages we meet the mind of the ruler who left her country with an imperial legacy of power and glory, and a vision of conquest, that was to endure over the centuries.

About the Author:
Peggy K. Liss is an eminent historian and currently a Visiting Fellow at The Johns Hopkins University. She is also the originator and historical advisor of the television series The Buried Mirror: Reflections on Spain and the New World, airing this year on both cable television and PBS.

Anniversaries, like family gatherings, have a way of exploding conventional truths. This book originally appeared in 1992, during the quincentenary of Christopher Columbus's arrival in America on a voyage commissioned. by Isabel. By that year's end, Columbus had been demoted from discoverer to invader, his future status in the history books under siege.

And now in 2004, what of Isabel, on this, the 500th anniversary of her death? I can only conclude that, whatever the fate of Columbus, Isabel stands firm; she is a major historical figure of the Western world. Her sponsoring of a voyage linking Europe and America and setting the initial nature of encounter remains one reason why. Another is her stature has never been solely based upon a positive assessment of what she did and why she did it. Within Western history, she has no pedestal to crash down from.

Nonetheless, Isabel was a force, personally and politically: she threaded her way through conspiracies, faced down adversaries, triumphed in a civil conflict and then in a religious war. She gained the crown on her own terms, surrounded herself with able administrators, evoked awed respect from her subjects, and forged powerful alliances. She built a state and led her country into international preeminence and toward world empire. She was also fortunate in that, marrying sight unseen, she shared a remarkable lifelong love and working partnership with an equally strong king, Fernando of Aragón, whose temperament and skills complemented hers. A reigning queen, she was the mother of notable queens, as well as of a unified Spain. That said, there remains the infamous Isabel who instituted the Spanish Inquisition and gave Jews and Muslims the choice of conversion or expulsion from their native land.

The original edition of this book pried apart the jointness of the dual reign and established the authority and something of the personality of Isabel. There I was swimming against a tide of interest in social and regional Spanish history to look again at a political figure. Nonetheless, reconsidering a ruling queen provided new insight in social and cultural phenomena — for instance, shedding light on her important royal role in the Inquisition and in promoting or inhibiting violent outbreaks against Jews, as well as in the lead-up to their expulsion. I also then sought to overturn two dismissive verdicts on Isabel, to establish that she was neither simply a woman of saintly piety nor a religious fanatic. In the doing, the range of imagery and symbols she employed to advertise herself and her program became apparent and highly important. Yet questions have lingered: Her ideology unpacked, how effective was it? How much of it did she herself take to heart? And how did an intrepid but obscure young princess become so formidable a monarch? This edition responds to those questions. It looks harder at Isabel's character and her acute sense of what was expected of her as a Spanish ruler, as well as at her determination to meet the highest of those expectations. It more clearly charts the evolution of her personality, intellect, and goals in interaction with events. Some revision and rearrangement of certain chapters, for example, builds on what was initially presented as background information in discussing how importantly history and tradition figured in her thinking and self-representation.

Reflection has confirmed that Isabel was highly intelligent, courageous, and politically astute. Developed and underscored in this edition is her demonstration of several outstanding traits: she was possessed of great moral conviction, she was ambitious, and she was literal-minded. She had a strong sense of reality, and her own reality included a huge legacy of myth -myth interwoven with and construed as history, and that history as divinely inspired and as sacrosanct tradition. Upon gaining the crown, she committed herself wholeheartedly to fulfilling the traditional aspirations of her nation and its greatest rulers as she understood them. Isabel believed fervently that Spain's ruler was preeminent on earth and divinely charged with leading an ongoing Spanish mission that in time was to culminate universal history, and that central to that mission was Christian advance against infidel and heretic. She was now that ruler. Moreover, she recognized that to reign successfully required the monarch be seen as imbued with virtues considered royal, the foremost of them being prudence, and she strove both to cultivate and personify those virtues.

This book tells how Isabel, displaying moral conviction and unflinching moral certitude, turning ideology into Spanish destiny, gained immense popularity. It looks at how she and her adherents widely disseminated her stance -through histories, architecture and iconography, drama, poems, and ballads, and songs and sermons. And it traces how what she stood for struck responsive chords in popular belief. Clearly, however disparate her policies, in carrying them out she translated aspirations commonly understood as Spanish ideals into anticipated reality; and her policies gained cohesion through each being presented as furthering the national mission. It shows how Isabel, both behaving as an absolute monarch and firmly believing in the propaganda she engendered, successfully presented centralizing innovation as continuity and reform as renovation. In the doing, she seamlessly linked religion and politics. So, for example, she rationalized the Inquisition and the expulsions of Jews and Muslims as eradicating impurities or stains from the social fabric.

A principal criticism of the original edition was that it relied too strongly on the writings of Isabel's chroniclers and courtiers. Since then, work in various fields of history has confirmed that such accounts, beyond being many and rich and pleasurable, can be read to provide invaluable insights into the context and narrative of a royal life and into ideologies speaking to systems of cultural belief as well. To a generation wise in the art of the spin, it is far easier to accept that Isabelline chroniclers both attest to the gap between historical reality and operative myth and to their symbiosis. The decade or so since that first edition appeared has reconfirmed that how Isabel and her publicists presented her can yield crucial evidence to her character, convictions, and purposes, as well to the ideational, religious, and political contexts of her times. Those chronicling contemporaries of hers -along with the rhetoric she and they employed and other conduits of her symbolic imagery- reveal just how Isabel appealed to, and stimulated, an ingrained militant religious faith and a belief in national mission. Moreover, she did so with telling effect on Spanish, Western, and indeed world history. The historian, José Manuel Nieto Soria, who has done much in the past dozen years to trace the two-way flow of political theology in Isabel's Spain, has put it this way: "at the end of the fifteenth century, the ideological foundations and the practice of propaganda that were consubstantial were not secondary aspects of ruling, but essential dimensions of it, in a context more or less generalized in the West and that Machiavelli left accurately defined in asserting that to govern is to make to believe."

In the years since 1992, Isabel's historical stature has if anything increased, as is reflected in a stream of Isabelline studies. This new edition has benefited from recent scholarship as well as my own further researches and reconsiderations. New monographs and the resurgence of scholarly interest in Spanish political history and in royal figures has served to confirm Isabel's power and effectiveness, illuminate her personality, times, and governance, and affirm her place as a mover and shaker in Western history. And that historians have become more concerned with religious influences on politics has served to project a queen who provides a stellar instance of counting on the interplay of the religious and the political to achieve cultural impact into even greater historical prominence. In particular, the writings of Miguel Àngel Ladero Quesada continue to illuminate ruler and period most broadly. And in the past decade, Nieto Soria has tirelessly delineated the fundamental political theory and the ideology of Isabel's dynasty and mapped out the paths of diffusion of royal ideology and its interplay with popular belief and sentiment. Citations to a number of their newer works and others appear in the endnotes here. I have also restored some annotations omitted from the first edition and corrected some errors and misprints appearing there.

1. Isabel the Queen: Life and Times

2. Isabel the Queen: Life and Times

3. Isabel the Queen: Life and Times

4. Isabel the Queen: Life and Times