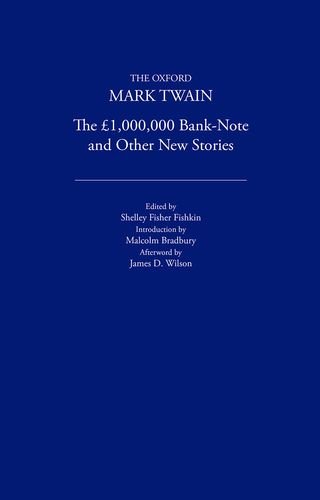 A delightful collection of diverse tales, ranging from short stories and personal essays to literary criticism and travel pieces, The Ł1,000,000 Bank-Note gathers together nine works, many of which are now unobtainable elsewhere, that testify to the range of Twain's humor and the diversity of his interests. It was published in 1893, in a disastrous decade for the United States, a time marked by doubt and waning optimism, rapid immigration, labor problems, unchecked Social Darwinism, and the rise of political violence and social protest. It was also a difficult time for Twain personally, as he was forced into bankruptcy and devastated by the death of his favorite daughter, Suzy. Yet the title story still brims with confidence and optimism, marking the moment of hope just before Twain turned to the grim stories of his later years. "The Ł1,000,000 Bank-Note" charts the magical rags-to-riches ascent of a virtuous and resourceful mining broker's clerk from San Francisco who arrives in London with a single dollar in his pocket, and proceeds to ultimate and splendid financial success and fame in London society -- a paean to ingenuity and a celebration of its cunning confidence-man narrator. The other pieces range from "Mental Telegraphy," a serious essay reflecting Twain's continuing interest in the occult -- he and his wife would later try several seances, poignantly and unsuccessfully, to contact their daughter Suzy -- to a tongue-in-cheek "Petition to the Queen of England" for relief from taxes. Readers will also find several of Twain's famously engaging travel essays, combining autobiographical reminiscence, tall tales, and ruminations on society and culture in pieces on the new city of Berlin, advances in transatlantic travel, and, in "Playing Courier," a brilliant comedy of confusion at the common frustrations of international travel. A charming collection of tales that cover the wide range of Twain's diverse interests.