Items related to The Compleat Conductor 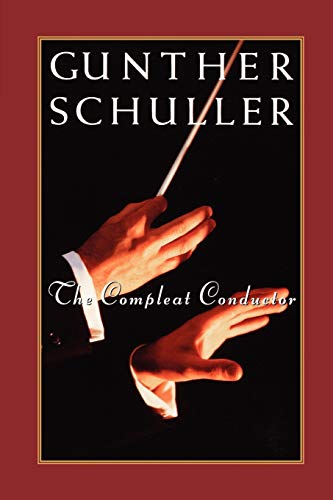 A world-renowned conductor and composer who has lead most of the major orchestras in North America and Europe, a talented musician who has played under the batons of such luminaries as Toscanini and Walter, and an esteemed arranger, scholar, author, and educator, Gunther Schuller is without doubt a major figure in the music world. Now, in The Compleat Conductor, Schuller has penned a highly provocative critique of modern conducting, one that is certain to stir controversy. Indeed, in these pages he castigates many of this century's most venerated conductors for using the podium to indulge their own interpretive idiosyncrasies rather than devote themselves to reproducing the composer's stated and often painstakingly detailed intentions.
Contrary to the average concert-goer's notion (all too often shared by the musicians as well) that conducting is an easily learned skill, Schuller argues here that conducting is "the most demanding, musically all embracing, and complex" task in the field of music performance. Conducting demands profound musical sense, agonizing hours of study, and unbending integrity. Most important, a conductor's overriding concern must be to present a composer's work faithfully and accurately, scrupulously following the score including especially dynamics and tempo markings with utmost respect and care. Alas, Schuller finds, rare is the conductor who faithfully adheres to a composer's wishes. To document this, Schuller painstakingly compares hundreds of performances and recordings with the original scores of eight major compositions: Beethoven's fifth and seventh symphonies, Schumann's second (last movement only), Brahms's first and fourth, Tchaikovsky's sixth, Strauss's "Till Eulenspiegel" and Ravel's "Daphnis et Chloe, Second Suite." Illustrating his points with numerous musical examples, Schuller reveals exactly where conductors have done well and where they have mangled the composer's work. As he does so, he also illuminates the interpretive styles of many of our most celebrated conductors, offering pithy observations that range from blistering criticism of Leonard Bernstein ("one of the world's most histrionic and exhibitionist conductors") to effusive praise of Carlos Kleiber (who "is so unique, so remarkable, so outstanding that one can only describe him as a phenomenon"). Along the way, he debunks many of the music world's most enduring myths (such as the notion that most of Beethoven's metronome markings were "wrong" or "unplayable," or that Schumann was a poor orchestrator) and takes on the "cultish clan" of period instrument performers, observing that many of their claims are "totally spurious and chimeric." In his epilogue, Schuller sets forth clear guidelines for conductors that he believes will help steer them away from self indulgence towards the correct realization of great art.
Courageous, eloquent, and brilliantly insightful, The Compleat Conductor throws down the gauntlet to conductors worldwide. It is a controversial book that the music world will be debating for many years to come.

What makes for a "compleat" conductor? According to Gunther Schuller, it is a combination of fidelity to the score and going "for the grand line ... the clarification of the inherent structure(s)." Schuller, himself a conductor, has written The Compleat Conductor as a kind of report card on many of this century's foremost practitioners of the art. Using scores from Beethoven, Brahms, Schumann, Tchaikovsky, Strauss, and Ravel as his final exam, Schuller measures the work of the world's great conductors--everyone from Toscanini to John Eliot Gardiner--against what's printed on the page, and he finds most wanting in comparison.

The Compleat Conductor is partly an indictment of the failings of other conductors, partly Schuller's reflections on music, performance, and the authority of the score versus the authority of the conductor. Many of Schuller's pronouncements are sure to arouse controversy, but even for music lovers who disagree with his grading system, there's plenty of food for thought in The Compleat Conductor.

Gunther Schuller is a composer, conductor, orchestral hornist, educator, author. He served as the Artistic Director at the Berkshire Music Center at Tanglewood and as President of the New England Conservatory of Music. The author of the landmark studies Early Jazz and The Swing Era, Schuller was also a recipient of a MacArthur Foundation "genius" grant.

Book Description Oxford University Press Inc, United States, 1999. Paperback. Condition: New. Revised ed. Language: English. Brand new Book. Gunther Schuller is one of America's leading contemporary composers, conductors, and musicologists. He has become increasingly dismayed about the way contemporary orchestra leaders have been ignoring the composer's intentions in playing the basic concert repertory from the mid-nineteenth century to the present. In this controversial new book, Schuller puts forth his own principles of conducting, and then analyses in detail several classical masterpieces, comparing the composers' original notation to the way conductors interpret them. Showing ways in which current orchestra and conducting standards can be radically improved, this book is an indictment of contemporary musical trends and an incisive study of the dialogue between composition and performance. Seller Inventory # AAV9780195126617

5. The Compleat Conductor (Paperback or Softback)