Items related to The First Americans, Second Edition: Prehistory to...

Hakim, Joy The First Americans, Second Edition: Prehistory to 1600 (History of US, Book 1)

The First Americans, Second Edition: Prehistory to 1600 (History of US, Book 1) 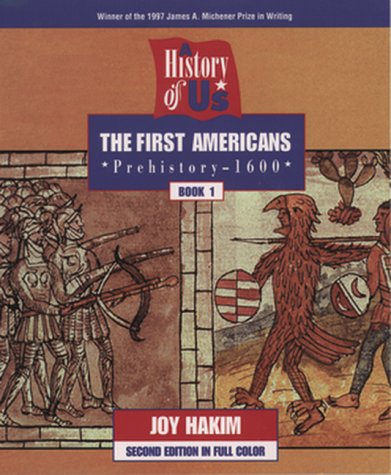 This volume starts in the Ice Age with some of our ancestors who hiked and canoed from Asia to the New World and, dozens of centuries later, got called Indians by Christopher Columbus. Evidently he had no idea where his ships had taken him.

Climb into your time-and-space capsule-and hang on tight! Trek across Beringia with the hunter-gatherers. Hunt seals with the Inuit; harvest corn on a cliff-top mesa; hunt the mighty buffalo. Sail with Leif Eriksson and Christopher Columbus. Stand with the conquistadors at the gates of a splendid Aztec city. The world of the First Americans in about to change forever.

Joy Hakim is a former newspaper writer and editor and elementary school teacher who holds a bachelor's degree in government from Smith College and a master's degree in education from Goucher College.