Items related to The Oxford Encyclopedia of Ancient Greece and Rome:...

The Oxford Encyclopedia of Ancient Greece and Rome: 7-Volume Set

The Oxford Encyclopedia of Ancient Greece and Rome: 7-Volume Set 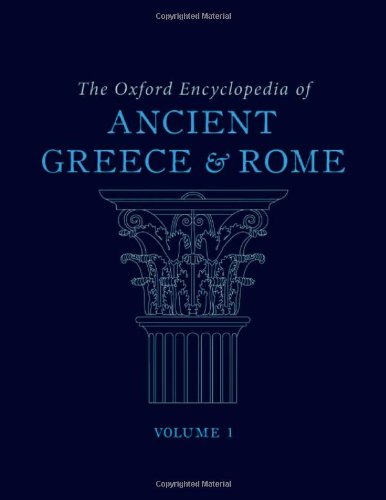 The Oxford Encyclopedia of Ancient Greece and Rome is the clearest and most accessible guide to the world of classical antiquity ever produced. This multivolume reference work is a comprehensive overview of the major cultures of the classical Mediterranean world--Greek, Hellenistic, and Roman--from the Bronze Age to the fifth century CE. It also covers the legacy of the classical world and its interpretation and influence in subsequent centuries. The Encyclopedia brings the work of the best classical scholars, archaeologists, and historians together in an easy-to-use format.

The articles, written by leading scholars in the field, seek to convey the significance of the people, places, and historical events of classical antiquity, together with its intellectual and material culture. Broad overviews of literature, history, archaeology, art, philosophy, science, and religion are complimented by articles on authors and their works, literary genres and periods, historical figures and events, archaeologists and archaeological sites, artists and artistic themes and materials, philosophers and philosophical schools, scientists and scientific areas, gods, heroes, and myths.

Michael Gagarin is James R. Dougherty, Jr., Centennial Professor of Classics, University of Texas at Austin. He was president of the American Philological Association, 2002-2003.

"This is a perfect place for undergraduates beginning research projects who need an overview of a new topic and a starting bibliography" --Phoebe Acheson, Classics Librarian, University of Georgia

Shipping: US$ 26.43
From Netherlands to U.S.A.
Destination, rates & speeds