Items related to Seven Myths of the Spanish Conquest 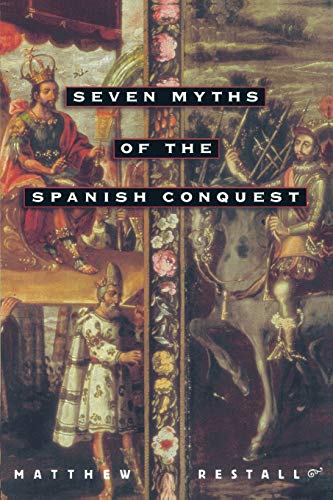 Here is an intriguing exploration of the ways in which the history of the Spanish Conquest has been misread and passed down to become popular knowledge of these events. The book offers a fresh account of the activities of the best-known conquistadors and explorers, including Columbus, Cortés, and Pizarro.

Using a wide array of sources, historian Matthew Restall highlights seven key myths, uncovering the source of the inaccuracies and exploding the fallacies and misconceptions behind each myth. This vividly written and authoritative book shows, for instance, that native Americans did not take the conquistadors for gods and that small numbers of vastly outnumbered Spaniards did not bring down great empires with stunning rapidity. We discover that Columbus was correctly seen in his lifetime--and for decades after--as a briefly fortunate but unexceptional participant in efforts involving many southern Europeans. It was only much later that Columbus was portrayed as a great man who fought against the ignorance of his age to discover the new world. Another popular misconception--that the Conquistadors worked alone--is shattered by the revelation that vast numbers of black and native allies joined them in a conflict that pitted native Americans against each other. This and other factors, not the supposed superiority of the Spaniards, made conquests possible.

The Conquest, Restall shows, was more complex--and more fascinating--than conventional histories have portrayed it. Seven Myths of the Spanish Conquest offers a richer and more nuanced account of a key event in the history of the Americas.

According to historical consensus, the Spanish conquest of the New World was a cataclysm in which superior European technology and organization overwhelmed Native American civilizations. In this daring revisionist critique, Penn State historian Restall describes a far more complex process in which Indians were central participants on both sides of the struggle. Far from regarding the Spaniards as gods, Restall argues, Indians offered a variety of shrewd, pragmatic responses to the invaders while advancing their own political agendas. Indeed, given that the conquistadors were vastly outnumbered by their Indian allies, the Conquest was in many respects a civil war between natives. Nor did Indian societies fall apart at one blow: independent Mayan polities, for example, persisted into the 19th century. Even under Spanish rule, Indians continued to live in self-governing communities, where they maintained their own languages, cultures and leaders who had considerable clout with the colonial administration. Drawing on Spanish, Native American and West African accounts of the Conquest, academic studies and even Hollywood movies, Restall examines the paradigm of European triumph and Indian "desolation" as it evolved from the conquistador's self-serving narratives to contemporary interpretations by such writers as Jared Diamond and Kirkpatrick Sale. Rejecting the implicit juxtaposition of "subhuman" Indians with "superhuman" Europeans, Restall asserts instead that, through war and epidemic, native societies retained much of their autonomy and cohesion, and "turned calamity into opportunity." Restall's provocative analysis, wide-ranging scholarship and lucid prose make this a stimulating contribution to the debate on one of history's great watersheds. Photos.
Copyright 2003 Reed Business Information, Inc.