Items related to The Small House at Allington (The Barsetshire Novels)

Trollope, Anthony The Small House at Allington (The Barsetshire Novels) 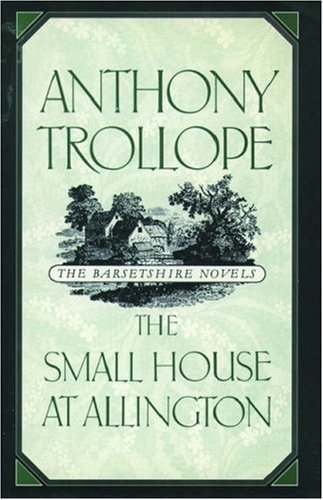 Roderick Random was published in 1748 to immediate acclaim, and established Smollett among the most popular of eighteenth-century novelists. Narrated by an unheroic, apparently rudderless hero named Random, Smollett's wildly energetic and entertaining novel is held together not least by the narrator's outrage and dismay. Although Roderick Random was first published anonymously, the secret of Smollett's authorship was soon discovered, with the result that many readers thought they recognized similarities between the life of the hero and that of his creator. Certainly Roderick Random's early years - disinherited and without wealth and influence - and his university career, apprenticeship and service as a naval surgeon, vividly reflect the experiences of the author. How Random learns to survive the fickle hand of fortune, recovers his long-lost father, marries his beloved Narcissa, and dispatches his enemies is the stuff, not of autobiography but of a novel which profoundly satirizes the moral chaos of its times. Dickens and Thackeray, among other great Victorians, applauded Smollett for his wit and invention, and in Roderick Random we enjoy the novel of a pioneer opening up the frontiers of fiction.

Anthony Trollope (1815-1882) was born in London to a bankrupt barrister father and a mother who, as a well-known writer, supported the family. Trollope enjoyed considerable acclaim both as a novelist and as a senior civil servant in the Post Office. He published more than forty novels and many short stories that are regarded by some as among the greatest of nineteenth-century fiction.

Book Description Hardcover. Condition: New. Dust Jacket Condition: New. First Thus. This copy is in mint, unmarked condition quarter bound in cream cloth to black paper covered boards with blind 'Barsetshire novels' titling to the upper board and bright gilt titling to the spine. This copy is bright, tight, white and square. The unclipped dust wrapper is in mint condition International postal rates are calculated on a book weighing 1 Kilo, in cases where the book weighs more than 1 Kilo increased postal rates will be quoted, where the book weighs less then postage will be reduced accordingly. Lily Dale is courted by two young men of widely-differing social backgrounds in this mid-nineteenth-century novel, set in Trollope's imaginary Barsetshire. Ref CCC 1. Seller Inventory # 028708

Shipping: US$ 12.77
From United Kingdom to U.S.A.
Destination, rates & speeds

THE SMALL HOUSE AT ALLINGTON (TH