Items related to The Song of the Distant Dove: Judah Halevi's Pilgrimage 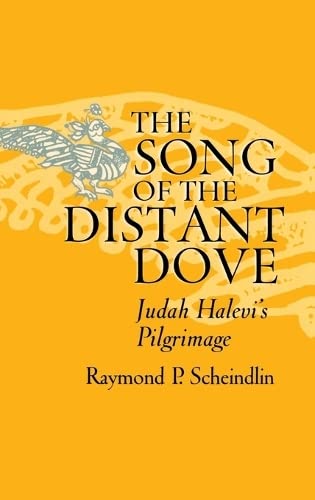 Judah Halevi (ca. 1075-1141) is the best known and most beloved of medieval Hebrew poets, partly because of his passionate poems of longing for the Land of Israel and partly because of the legend of his death as a martyr while reciting his Ode to Zion at the gates of Jerusalem. He was also one of the premier theologians of medieval Judaism, having written a treatise on the meaning of Judaism that is still studied and venerated by traditional Jews.

As a member of the wealthy Jewish elite of medieval Spain, Halevi enjoyed the material pleasures available to the upper classes. Alongside his sacred poetry, he wrote verses about youthful romance, wine songs, and odes to his friends. In midlife, Halevi turned more seriously to religion, eventually abandoning his family and community with hopes of ending his life as a pilgrim in the land of Israel.

Miraculously, a number of letters in Arabic were discovered about fifty years ago, some written by Halevi, some written to Halevi, and yet others written about Halevi by his friends in Egypt. These letters preserve a vivid record of Halevi's travels as a pilgrim and of the last months of his life. Raymond Scheindlin has written the first book-length treatment of Halevi's pilgrimage in any language. He tells the story of Halevi's journey through selections from these revealing sources and explores its meaning through discussions of his stirring poetry, presented here in new verse translations with full commentary.

In Hebrew verse of unparalleled beauty, Halevi salutes the Holy Land; he argues with friends about his intentions; he sets out his fantasy of crossing the ocean, of walking the hills and valleys of the Land of Israel, and of dying and mingling his bones with its soil and stones. He even confides his secret fears and uncertainties, his longing for his family, and his fear of death at sea. With his consummate skill as a translator of Hebrew poetry and his mastery of Judeo-Arabic culture, Scheindlin provides fresh insights into the literary, religious, and historical facets of Halevi's captivating poetry and fateful journey.

"This luminous and elegant study brings to life one of the most remarkable personalities of medieval Judaism, the Spanish Hebrew poet and philosopher Judah Halevi at the moment of his fabled pilgrimage to the land of Israel, and in doing so, captures an entire Jewish culture in all its complex yearnings. By combining his unequaled gifts as a scholar, literary translator, and interpreter of poetry, Scheindlin has produced a book quite unlike any other in contemporary Jewish writing." --David M. Stern, Ruth Meltzer Professor of Classical Hebrew in the Jewish Studies Program at the University of Pennsylvania

"Literary scholars will find much that is new here, for Scheindlin is the most sensitive reader of these texts among Hebrew poetry scholars today. He also places the Hebrew poet squarely in his Islamic/Arabic context. With his integrated, interdisciplinary approach to the poet's pilgrimage, blending literature, philosophy, religion, and history, the author makes a very important contribution." --Mark Cohen, Princeton University, author of Under Crescent and Cross: The Jews in the Middle Ages
"Raymond Scheindlin is a particularly spiritually sensitive literary scholar and translator, and his book captures as none has before the complexity, beauty, and wisdom of Halevi's poetry." --Tikkun
"This superb study of the most important poet-philosopher of medieval Jewish history should reawaken interest in his life and work. In his lucid, eloquent examination, Scheindlin provides the necessary materials for a modern reading of Halevi's treasured poems and theological treatises." --Choice
"Scheindlin creates a work that, like his subject's life and writings, has a splendid resonance. ...we have here not only a new way of interpreting the great Halevi, but it feels as if, through these elegant translations, we've also been presented with a newly discovered cache of Halevi poems. Few scholarly works provide readers with such accessible literary riches." --Jewish Exponent
"Writing with characteristic elegance, Scheindlin brings to bear all of his scholarly gifts: graceful literary translation; incisive analysis; and an imposing command of classical Jewish sources, medieval Jewish history, and Jewish and Islamic religious thought. ...The Song of the Distant Dove is a pleasure to read...Schendlin has a rare gift for making medieval Hebrew literature accessible to a broad audience without sacrificing scholarly rigor or sophistication. ...Scheindlin's work is the authoritative study of Halevi's pilgrimage and a magnificent contribution to the growing body of scholarship on the Jews in the medieval Islamic world and their literary creativity." --Journal of the American Oriental Society
"Scheindlin's insights into the poetry as a vivid expression of the poet's life and thought make this study strikingly rich. It is at once a literary study, a work of religious thought, and an important contribution to cultural and intellectual history. This remarkable study will leave a deep imprint on both historical scholarship and the literary and religious imagination."--Speculum