Items related to By the People: Debating American Government

By the People: Debating American Government 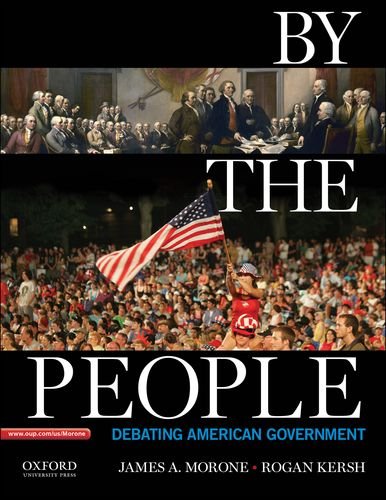 Challenge your students to ENGAGE in the conversation and process; THINK about the ideas, history, structure, and function; and DEBATE the merits of American government and politics in the 21st century.

In a storytelling approach that weaves contemporary examples together with historical context, By the People: Debating American Government explores the themes and ideas that drive the great debates in American government and politics. It introduces students to big questions like Who governs? How does our system of government work? What does government do? and Who are we? By challenging students with these questions, the text gets them to think about, engage with, and debate the merits of U.S. government and politics.

* "Comparing Nations" boxes discuss how other nations operate their courts, legislatures, media, and elections and help students understand what is vital and distinctive about the U.S.

* Chapter Two introduces students to seven key American ideas, which are revisited throughout the text

* "The Bottom Line" summaries conclude each chapter section, underscoring the most important aspects of the discussion

* "What Do You Think?" boxes encourage students to use their critical-thinking skills and debate issues in American government

* Four major themes, in the form of questions to spark debate, are presented to students in Chapter One and appear throughout the text

Online homework made easy! Tired of learning management systems that promise the world but are too difficult to use? Oxford offers you Dashboard, a simply, nationally hosted, online learning course--including study, review, interactive, and assessment materials--in an easy-to-use system that requires less than fifteen minutes to master. Assignment and assessment results flow into a straightforward, color-coded gradebook, allowing you a clear view into your students' progress. The system works on every major platform and device, including mobile devices.

Only $5 with the price of a new book! Also available for sale on its own. Contact your local OUP representative to order By the People + the Access Code Card for Dashboard.

For instructors, this site includes the teaching tools described below. For students, it offers a number of study tools including learning objectives, key-concept summaries, quizzes and essay questions, web activities, and web links.

Computerized Test Bank: Using the test authoring and management tool Diploma, this computerized test bank is designed for both novice and advanced users.

Now Playing: Learning American Government Through Film: This concise print supplement provides a variety of suggested films that illustrate concepts covered in the text. It is available in both a student and an instructor version and can be packaged with By The People for free.

Adopters of By The People can package any Oxford University Press book with the text for a 20% savings off the total package price. See our many trade and scholarly offerings at www.oup.com/us, then contact your local OUP sales representative to request a package ISBN. In addition, any title from the Very Short Introduction Series, a collection of brief books offering succinct introductions to a variety of topics, can be packaged for FREE.

James Morone (B.A., Middlebury College, and M.A. and PhD, University of Chicago) is Professor of Political Science at Brown University and five-time winner of the Hazeltine Citation for outstanding teacher of the year. A renowned scholar of American Political Science, Dr. Morone, an award-winning author, has published eight books including The Heart of Power (2009), Hellfire Nation (2003), and The Democratic Wish (1990). He served as President of the Politics and History Section of the American Political Science Association from 1999-2000 and the New England Political Science Association from 2002-03. He has been on the board of editors for eight scholarly journals and comments on politics in The New York Times, The London Review of Books, and The American Prospect.

Rogan Kersh (M.A. and PhD, Yale) is Provost and Professor of Political Science at Wake Forest University. A leading scholar in American Political Science, Dr. Kersh is best known for his work on health reform, obesity politics, and interest groups/lobbying. From 2006-12 he served as Associate Dean of the Wagner School of Public Service at New York University, where he built an undergraduate program, helped conceive and create NYU's new campus in Abu Dhabi, and was integral in the launch of a new Global Institute of Public Health. Dr. Kersh has published two books, more than fifty academic articles, and has provided commentary on U.S politics for dozens of different media outlets including CNN, Newsweek, and The New York Times. He was President of the American Political Science Association's organized section on Health Politics and Policy in 2011-12, and is an elected Fellow of the National Academy of Public Administration.

"By the People outperforms the competition in terms of its quality of writing and its ability to draw students in to its narrative."
--James Hobby, Cleveland State University

"I like how By the People has a comparative element to it and how the text uses recent political events as examples, lending to its accessibility and engagement. I also think it does a good job of handling contemporary issues, in terms of engaging arguments on both the left and right, and showing the perspectives of different sides."
--Kathleen Tipler, University of Oklahoma
"By the People is well organized and written in a style that is free of jargon. The major themes are presented clearly and the study questions at end of each chapter enable the instructor to assess how well the student is doing in comprehending the materials."
--John Ambacher, Framingham State University

1. By the People: Debating American Government

2. By the People: Debating American Government

3. By the People: Debating American Government