Items related to Heeding the Voices of Our Ancestors: Kahnawake Mohawk...

Alfred, Gerald Robert Heeding the Voices of Our Ancestors: Kahnawake Mohawk Politics and the Rise of Native Nationalism

Heeding the Voices of Our Ancestors: Kahnawake Mohawk Politics and the Rise of Native Nationalism 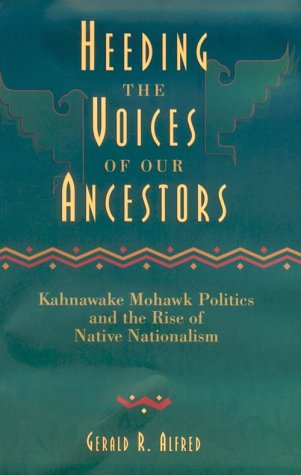 This book is the first comprehensive study of the driving force behind Native political activism, and the only scholarly treatment of North American Indian politics which integrates an explicitly Native perspective. With a broad historical scope rich in detail, and drawing on the particular experience of the Mohawks of Kahnawake, it offers an explanation of Indian and Inuit political activism focusing on the importance of traditional values and institutions in shaping Native responses to the state.

The book explains the recent rise of a militant assertion of sovereignty on the part of Native people in terms of three major factors: the existence of alternative institutions in the body of the nation's traditional culture; the self-conscious development of an alternative identity; and a persistent pattern of negative interaction with the state. It differs from other analyses focusing on similar factors in that it views nationalism not as a movement which activates in response to external factors, but as a persistent feature of political life which manifests itself in either a latent or active form in response to the interaction of the three factors discussed in the model.

Gerald Robert Alfred is an Assistant Professor in the Department of Political Science and Director of the Centre for Native Education at Concordia University in Montreal.

"[Alfred's] analysis enriches our understanding of tribal politics across the globe. ...his distinctively engaged perspective leads to insights that challenge conventional thinking about an issue of great import in our world."--Political Science Quarterly

1. Heeding the Voices of Our Ancestors: Kahnawake Mohawk Politics and the Rise of Native Nationalism