Items related to Constructing Pakistan: Foundational Texts and the Rise... 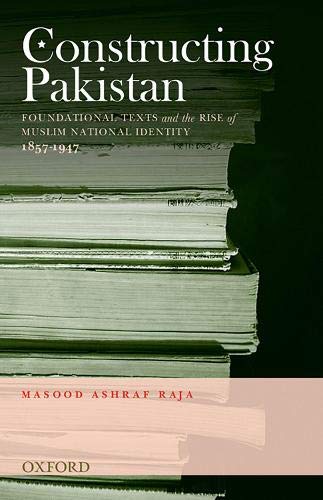 Constructing Pakistan addresses the previously neglected aspect of postcolonial and historical engagement with the creation and construction of Indian Muslim national identity before the partition of India in 1947. Masood Ashraf Raja's main assertion, challenging the conventional and postcolonial appraisals of the Indian national history, is that the Indian Muslim particular identity and Muslim exceptionalism preceded the rise of Congress or Gandhian nationalism. Using major theories of nationalism-including works of Benedict Anderson, Anthony D. Smith, John Breuilly, Partha Chatterjee and others-and analysis of literary, political, and religious texts produced by Indian Muslims, Constructing Pakistan traces the varied Muslim responses to the post 1857 British ascendancy. This study provides a multilayered discussion of Indian Muslim nationalism from the rise of post 1857 Muslim exceptionalism to the beginnings of a more focused struggle for a nation-sate in the 1940s.

In this dual act of retrieval and intervention, a varied mixture of literary, political, and religious texts are employed to suggest that if the Muslim textual production of this time period is read within the realm of politics and not just within the arena of culture, then the rise of Indian Muslim nationalism can be clearly traced within these texts and through their affective value for the Indian Muslims.

Raja combines close readings of the texts, their reception, and the politics of identity formation specifically related to the rise of Indian Muslim nationalism. The author's main argument hinges on two important assumptions: 1) After the rebellion it becomes extremely important for the Muslim elite to force the dominant British regime into a hegemonic view of the Muslims, and 2) this forces the Muslim elite to develop a language of politics that must always invoke the people in order to enter the British system of privileges and dispensations. Consequently, the rise of early Muslim exceptionalism and its eventual specific nationalistic unfolding, of which Pakistan was one outcome, can then be read as political acts that long preceded the Indian national party politics. The reason most Indian and European historians cannot trace a pronounced Muslim sense of separate identity before the 1940s is because they trace this identity either in the form of resistance or in the shape of party politics. The early loyalism of the Muslim elite, in such strategy, remains unexplained, as it does not fit the resistance model. Constructing Pakistan attempts to re-read this loyalism as a sophisticated form of resistance that, in the end, makes the Muslim question central to the British politics of post-rebellion era.

Masood Ashraf Raja is an Associate Professor of Postcolonial Literature and Theory at the University of North Texas and the editor of Pakistaniaat: A Journal of Pakistan Studies. His critical essays have been published in journals such as South Asian Review, Digest of Middle East Studies, Caribbean Studies, Prose Studies, Mosaic and others. He is currently working on his second book entitled Secular Fundamentalism: Poetics of Incitement and the Muslim Sacred.

Muslim literati ... selected for analysis well represented the ... aspirations of the Muslim community in their times. --Basharat Hussain Qizilbash, The Nation, Pakistan, September 10, 2010

Raja's research merits introspection and contemplation of the many issues it either raises or answers about contemporary Pakistan. --Aliya Anjum, Dawn, Pakistan, September 26, 2010.