Items related to Footprints in Time: Reminiscences of a Sindhi Matriarch

Footprints in Time: Reminiscences of a Sindhi Matriarch 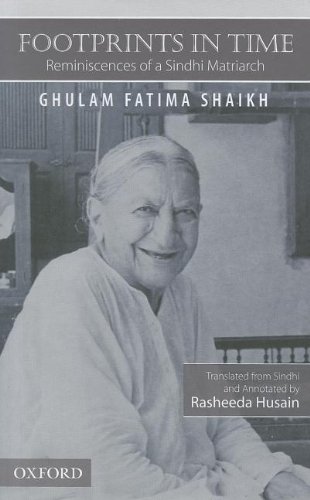 Ghulam Fatima Shaikh's saga spans two continents and two centuries. She witnessed the most momentous events of history of the subcontinent and lived to tell the tale. She was born in the late nineteenth century as Nandini Kripalani, in a wealthy, traditional Hindu household. She witnessed the conversions of many members of her family to Islam and the consequent litigations. Fatima endured the frequent absences of her father, a distant but romantic figure, for whom she does not conceal a sneaking admiration. Later, after marriage, she followed her husband's trail into unknown lands where she faced financial constraints, the First World War, famine, sicknesses and dislocation, but most of all a yearning for her loved ones. She coped with all these tribulations with remarkable grit, and survived to narrate this saga, with remarkable clarity at the age of 75 before she died in 1981.

This memoir provides a first-hand account of what conversion from Hinduism to Islam meant in practice; and its impact on Sindhi society from the late nineteenth century onwards. It contains intriguing information about what it was like to be a family that spanned the Hindu-Muslim divide, and how individual members coped with the challenges and pressures generated by conversion taking place within its ranks.

Sindhi Muslims were caught up in the Khilafat agitation of the period spanning the First World War and its immediate aftermath. This memoir presents an intimate picture of how this could affect one family, to the extent that husband, wife, and children eventually left Sindh. Through the prism of the author's description of life in various parts of the Ottoman, stretching from Madinah to Adana as well as many other places, we gain a profound understanding of an ordinary life, albeit from the perspective of what was perhaps not an ordinary family. We gain a clearer sense of what the Ottoman Empire 'meant' to Muslims of the subcontinent and how far some of them were prepared to go to support its continued existence.

Ghulam Fatima Shaikh was an institution in herself. Though semi-literate, she was a firm believer in the education of women. After her initial training as a midwife from the Tibbia College in Delhi, in 1939, she took courses in Home Nursing and First Aid from the St John's Ambulance Association. Her quest for learning led her to learn Arabic and Turkish and familiarized her with the lifestyles of the Arabs and Turks, among whom she spent many years during the First World War. In 1947, she founded the Fatima Girls Middle School in Hyderabad which she managed right up to her demise in 1981.

1. Footprints in Time: Reminiscences of a Sindhi Matriarch

2. Footprints in Time: Reminiscences of a Sindhi Matriarch

3. Footprints in Time: Reminiscences of a Sindhi Matriarch

6. Footprints in Time: Reminiscences of a Sindhi Matriarch