Items related to The People in the Playground

Opie, Iona The People in the Playground

The People in the Playground 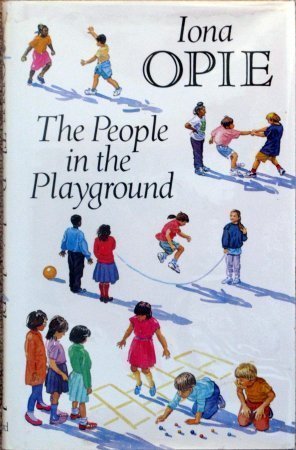 For nearly forty years Iona Opie worked with her husband, Peter, on a notable series of books on the traditional lore of childhood, among them Children's Games in Street and Playground, The Singing Game, and The Lore and Language of Schoolchildren. As part of her fieldwork, she visited a local school playground every week, where she would write down events exactly as they happened, and conversations exactly as they were spoken. The result of these many years of observation, The People in the Playground is a startlingly honest portrait of children at play, at once charming and hilarious, alarming and poignant, and full of infectious vitality.
Here we meet the children of the Junior School playground in Liss--their favorite games, their silliest jokes, their engaging personalities. Opie provides much insight into children's play and human behavior: why crazes begin and stop so suddenly; the reasons for popularity and unpopularity; the ways in which new lore arrives on the playground; the unconcerned killing in the perennial game of "War"; or the tender commiseration for a friend who has stubbed his toe. She follows individual children week by week: the bully and his victim; the intellectual who would rather read Alice's Adventures in Wonderland than join in the games himself; the girl whose tragic home life can be forgotten as she plays a ring game; or the boy who is obsessed with gorillas. A group of boys offer Opie their version of tag ("There's someone got hayfever, right? He catches another one and they get hayfever. And they get tagged by someone who's free and they're all right.") A young girl asks why Opie is writing everything down, and then presents her own rendition of "Popeye the Sailors Man" for the record. And on a rainy day unsuitable for their regular games, a vivacious child offers her very best jokes:"I'm the one who tells you jokes--ta ra! Here's another one. What's the most unfortunate letter in the alphabet? Will you write it down, please. I like you writing them down," she says to Opie and continues, "The letter U--because whenever there's trouble you always find U in the middle of it."
No one has previously attempted to describe and record life in a playground while it is actually happening. In these pages are rich and startling portraits of children at play: their art of storytelling, the friendships and enmities, the excited interest in sex, the diversity of characters, and above all, the hilarity which pervades the playground, creating entertainment out of trivialities.

About the Author: Iona Opie edited and wrote many books with her late husband Peter Opie, including The Oxford Dictionary of Nursery Rhymes, The Oxford Nursery Rhyme Book, The Lore and Language of Schoolchildren, and The Classic Fairy Tales.

`Written as diary extracts, this new work at once sparkles with a sense of being there, of what it is like to be a child in the alert, fast-moving school yard ... a fascinating addition to the Opie opus.' Jackie Wullschlager F.T.

`has a relaxed, bright-eyed feel that marks it out as hers alone' Juliet Rix, Observer

`enthralling ... she has written the natural history of the playground ... Everyone wanting to recapture the feeling of childhood, or learing to teach children, should read this book.' Paul Barker, Independent on Sunday

`her knowlege of children and what they do is unrivalled ... recreates the rumbustious, kaleidoscopic atmosphere of this childhood jousting area in a way that is hard to resist ... she can write like an angel, forever tolerant, unfussed, wise and honest' Nicholas Tucker, Independent

`Mrs Opie is an observer of genius ... This is a celebration of the irrepressible spirit of childhood ... splendid' John Rowe Townsend, Tablet

`fascinating and frequently hilarious ... Read it because it is very funny, and read it because children are intrinsically daft and invariably fascinating' Nick Hornby, Sunday Times

'Iona Opie ... writes with an open-eyed and open-eared lucidity that is in the best sense childlike. The scatological venom and sexual charge of these juvenile jokes and runes are as alarming as they are hilarious.'
Wilfrid Mellers, The Oldie

'By presenting these observations in this form she brings the children and their happenings alive ... a visual picture of the people in the playground.'
Bill Spence, Yorkshire Gazette and Herald

1. The People in the Playground

2. The People in the Playground

3. THE PEOPLE IN THE PLAYGROUND

4. The People in the Playground