Items related to War and Imperialism in Republican Rome: 327-70 B.C. 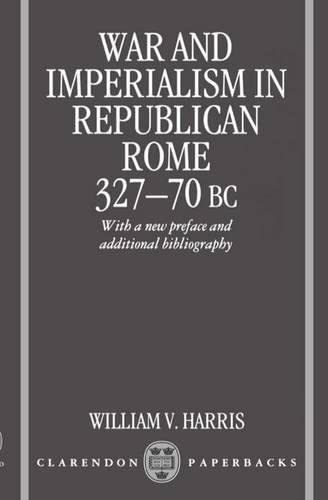 Between 327 and 70 B.C. the Romans expanded their empire throughout the Mediterranean world. This highly original study looks at Roman attitudes and behavior that lay behind their quest for power. How did Romans respond to warfare, year after year? How important were the material gains of military success--land, slaves, and other riches--commonly supposed to have been merely an incidental result? What value is there in the claim of the contemporary historian Polybius that the Romans were driven by a greater and greater ambition to expand their empire? The author answers these questions within an analytic framework, and comes to an interpretation of Roman imperialism that differs sharply from the conventional ones.

William V. Harris is Shepherd Professor of History at Columbia University and Director of the Center for the Ancient Mediterranean.

"Marks a major advance in our understanding of Roman imperialism."--Times Literary Supplement

"Recommended for undergraduate and research libraries....All subsequent studies of Roman imperialism will have to take account of this book."--Choice

Shipping: US$ 43.93
From United Kingdom to U.S.A.
Destination, rates & speeds