Items related to Europe: A History 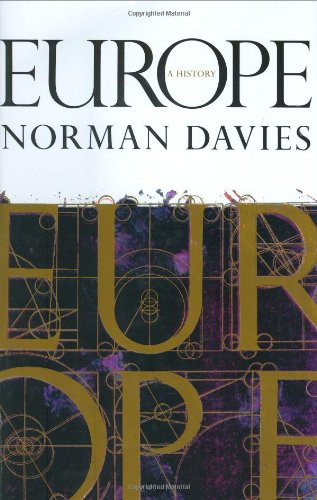 Shelf wear to dust jacket and some light marking to page edges. Shipped from the U.K. All orders received before 3pm sent that weekday.

With Europe: A History, University of London professor Norman Davies has undertaken the near impossible: a synthetic one-volume overview of Europe from prehistory through the present. Remarkably, he has succeeded. Europe: A History is a conventional narrative, proceeding forward in time at a gradually decelerating pace. (The beginning covers millions of years of prehistory, while the final chapter discusses the 46 years between World War II and the book's publication.) But Davies's writing--vigorous, incisive, and confidently knowledgeable--carries the reader along, while the steady sweep of the main narrative is broken up by "capsules," boxed passages examining particular places, customs, or issues that cut across chronological lines. Davies, who has written two books on Polish history, also gives the eastern part of Europe its due coverage, unlike many of his predecessors, and manages to include commoners and the persecuted or ignored in his story along with the mighty and the royal. Europe: A History won't please everybody, but it's a highly intelligent, superbly readable overview that is certain to become a standard text.

NORMAN DAVIES C.M.G., F.B.A. is Professor Emeritus of the University of London, a Supernumerary Fellow of Wolfson College, Oxford, and the author of several books on Polish and European history, including God's Playground, White Eagle, Red Star, The Isles, Microcosm and Europe: East and West.