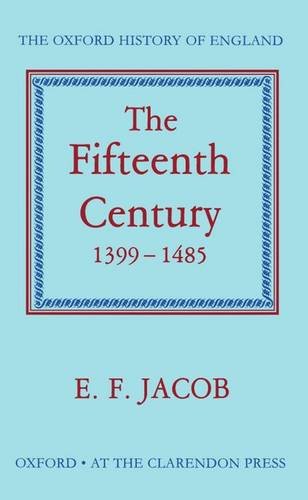 The sixth volume in the acclaimed Oxford History of England, this is an authoritative account of a violent and turbulent period which saw the fall and rise of four royal houses.

E. F. Jacob examines the impact of the Hundred Years' War and inadequate financial and administrative machinery on the failure of the Lancastrians, and shows that the War of the Roses were less a unique struggle between defined parties than a typical effort by a noble house to maintain and improve its position by the exercise of patronage and influence in a society that was rapidly undergoing change. He also provides detailed portraits of key figures of the age, and chapters on economic growth, Anglo-French relations, the Church, and the peaceful arts.

Each volume is an independent book, but the whole series forms a continuous history of England from the Roman period to the present century.

Book Description Hardcover. Condition: New. Dust Jacket Condition: New. Another superlative example of a scholar who can communicate. This is an outstanding history of the Wars Of The Roses, much of which inspired Shakespeare as well as the tv series of Game Of Thrones. Trivial as that may seem, it is undoubtedly true. Perceptive and thorough without being pedantic, E F Jacob is your ideal guide. Clean and tight new hardback, never read, and in perfect condition for the collector. No owner marks; not an ex-library copy; no annotations. Seller Inventory # ABE-1546946388328