Items related to The Politics of Dissent: Pacifism in France, 1919-1939 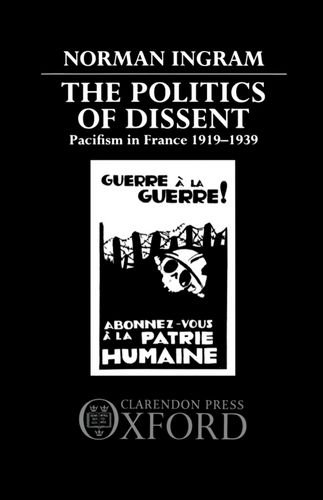 Based on hitherto untapped primary sources, this book traces the development of French pacifism from its nineteenth-century roots. Ingram analyzes the intertwining of three strands of dissent: over the origins of the First World War and the thesis of unique German war guilt; over the nature of contemporary French political society; and over the belief that another war would spell the end of western civilization. He also explores the nature and development of feminist pacifism in the inter-war period. His comprehensive scholarly analysis reveals that, unlike the primarily ethical or religous thinking which underpinned the Anglo-American peace movement, the nature of French pacifism was essentially political, with some elements prepared even to accept violence as a means to a desirable end, especially in response to the threat of incipient fascism.

`Ingram's book is an outstanding contribution to historical scholarship on a subject of the highest import.' Ronald Sampson, The Pacifist `His is the first scholarly account of the virtually unknown pacifist movement between the wars in a France where nationalism still set the agenda ... It is a dedicated and scrupulous piece of doctoral research.' History Today