Items related to Natural Law and the Theory of Property: Grotius to...

Buckle, Stephen Natural Law and the Theory of Property: Grotius to Hume

Natural Law and the Theory of Property: Grotius to Hume 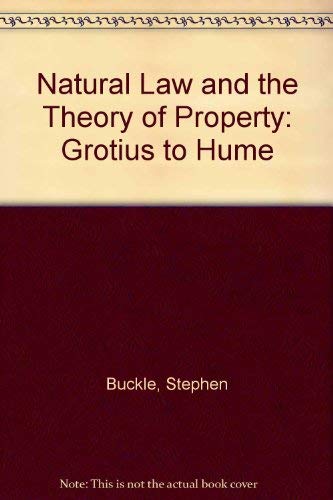 In this book, Buckle provides a historical perspective on the political philosophies of Locke and Hume, arguing that there are continuities in the development of seventeenth and eighteenth-century political theory which have often gone unrecognized. He begins with a detailed exposition of Grotius's and Pufendorf's modern natural law theory, focussing on their accounts of the nature of natural law, human sociability, the development of forms of property, and the question of slavery. He then shows that Locke's political theory takes up and develops these basic themes of natural law. The author argues further that, rather than being a departure from this tradition, the moral sense theory of Hutcheson and Hume represents a not entirely successful attempt to underpin the natural law theory with an adequate moral psychology.

Stephen Buckle is at University of Sydney.

"A beautifully written and extremely well researched book which offers a delightfully counter-intuitive, if not entirely persuasive, thesis. Moral, political and legal philosophers alike will find much here to enlighten them." --The Cambridge Law Journal

Buy Used
Condition: Good
Ex-library, so some stamps and... Learn more about this copy

1. Natural Law and the Theory of Property: Grotius to Hume

Shipping: US$ 13.11
From United Kingdom to U.S.A.
Destination, rates & speeds