The Emperor's New Mind: Concerning Computers, Minds, and the Laws of Physics 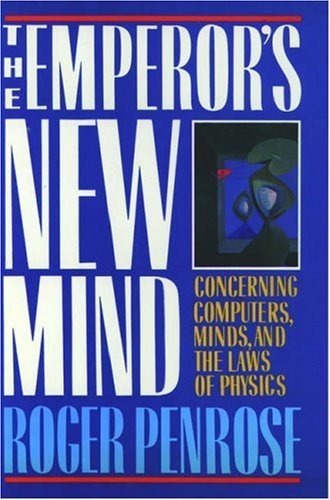 For decades, proponents of artificial intelligence have argued that computers will soon be doing everything that a human mind can do. Admittedly, computers now play chess at the grandmaster level, but do they understand the game as we do? Can a computer eventually do everything a human mind can do?
In this absorbing and frequently contentious book, Roger Penrose--eminent physicist and winner, with Stephen Hawking, of the prestigious Wolf prize--puts forward his view that there are some facets of human thinking that can never be emulated by a machine. Although the book ranges widely over relativity theory, quantum mechanics and cosmology, its central concern is what philosophers call the "mind-body problem." Penrose examines what physics and mathematics can tell us about how the mind works, what they can't, and what we need to know to understand the physical processes of consciousness. In particular, he argues that there is an important gap in our knowledge at the place where classical and quantum physics meet. He is among a growing number of physicists who think Einstein wasn't being stubborn when he said his "little finger" told him that quantum mechanics is incomplete, and he concludes that laws even deeper than quantum mechanics are essential for the operation of a mind. To support this contention, Penrose takes the reader on a dazzling tour that covers such topics as complex numbers, Turing machines, complexity theory, quantum mechanics, formal systems, Godel undecidability, phase spaces, Hilbert spaces, black holes, white holes, Hawking radiation, entropy, quasicrystals, the structure of the brain, and scores of other subjects. Penrose's illuminating (and sometimes amusing) drawings highlight his discussions throughout.
As Martin Gardner states in his foreword to the book, "Penrose's achievement in mathematics and physics spring from a lifelong sense of wonder toward the mystery and beauty of being. His little finger tells him that the human mind is more than just a collection of tiny wires and switches." The Emperor's New Mind will appeal to anyone with a serious interest in modern physics and its relation to philosophical issues, as well as to physicists, mathematicians, philosophers and those on either side of the AI debate.

Some love it, some hate it, but The Emperor's New Mind, physicist Roger Penrose's 1989 treatise attacking the foundations of strong artificial intelligence, is crucial for anyone interested in the history of thinking about AI and consciousness. Part survey of modern physics, part exploration of the philosophy of mind, the book is not for casual readers--though it's not overly technical, it rarely pauses to let the reader catch a breath. The overview of relativity and quantum theory, written by a master, is priceless and uncontroversial. The exploration of consciousness and AI, though, is generally considered as resting on shakier ground.

Penrose claims that there is an intimate, perhaps unknowable relation between quantum effects and our thinking, and ultimately derives his anti-AI stance from his proposition that some, if not all, of our thinking is non-algorithmic. Of course, these days we believe that there are other avenues to AI than traditional algorithmic programming; while he has been accused of setting up straw robots to knock down, this accusation is unfair. Little was then known about the power of neural networks and behavior-based robotics to simulate (and, some would say, produce) intelligent problem-solving behavior. Whether these tools will lead to strong AI is ultimately a question of belief, not proof, and The Emperor's New Mind offers powerful arguments useful to believer and nonbeliever alike. --Rob Lightner

About the Author
Roger Penrose is the Rouse Ball Professor of Mathematics at the University of Oxford. He has received a number of prizes and awards, including the 1988 Wolf Prize which he shared with with Stephen Hawking for their joint contribution to our understanding of the universe.

1. The Emperor's New Mind: Concerning Computers, Minds, and the Laws of Physics

2. The Emperor's New Mind: Concerning Computers, Minds, and the Laws of Physics

5. The Emperor's New Mind: Concerning Computers, Minds, and the Laws of Physics

6. The Emperor's New Mind: Concerning Computers, Minds, and the Laws of Physics

7. The Emperor's New Mind Concerning Computers, Mind, and The Law of Physics

8. The Emperor's New Mind: Concerning Computers, Minds, and the Laws of Physics